Tirupati, 02 July 2012: On the concluding day of the Ongoing Three Day Annual Jyestabhishekam of Sri Govindaraja Swamy, the Temple Priests performed Snapana Tirumanjanam and  Kavacha Prathista to the Processional deity of Lord Govindaraja Swamy and His consorts in Temple premises on Monday morning.
The gleaming golden armours covering the icons all year round are removed only for three days in a year during the ‘Jyesthabhishekam’ performed for the ‘unarmoured’ deities during the month of June-July.
On the third day,after a ‘snapana thirumanjanam’ to the deities, the purified armours were re-adorned to the deities ending the annual ritual.
Preventing corrosion
It is a general practice in the temples to put armours – kavachams to icons so that they shied the ‘panchaloha’ idols from wear and tear due to the periodical abhishekams performed to them using a range of pooja items like milk, honey, fruit jam, curd, sandalwood paste which tend to corrode the centuries old idols.
Local Temples DyE.O Sri Chinna Swamy, AEO Sri Subramanyam, temple staff and devotees took part. 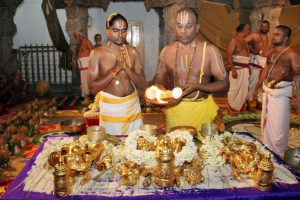 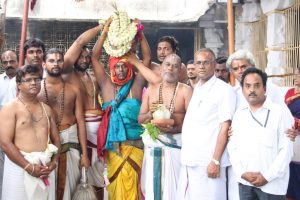 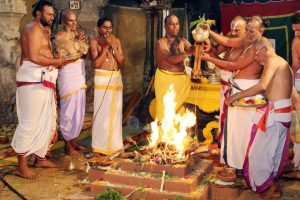