Kanchipuram, 29 September 2012: The Spiritual City of Kanchipuram in Tamilnadu on Saturday evening witnessed the grandeur of the Celestial Wedding of Lord Malayappa Swamy with Sridevi and Bhudevi which captivated tens of thousands of devotees who converged to take a glimpse of the “Grand celestial marriage”.
The TTDs with an aim to widespread the Hindu Sanathana Dharma has planned this “Divine Wedding” outside the Tirumala temple not only in the state of Andhra Pradesh but in all major cities across the country. The “Srinivasa Kalyanams” not alone spread bhakti in nook and corner of the country but also promoted spiritual values in masses especially among the youth.
The team of archakas from TTD, performed the celestial marriage in the vast grounds of SSKV School Grounds located adjacent to Kamakchi Amman koil which began with Vishwaksena Aradhana by 6.30pm followed by Punyahavachanam, Ankurarpana, Kanakana Dharana, Agni Pratistha, Mahajana Sankalpam and later the deities are adorned with silk vastrams. This ritual was followed by Kanayadanam and finally the much awaited moment Mangalya Dharana ceremony.
The glory of the divine wedding enhanced with the devotional music songs rendered by TTD’s Annamacharya Project artistes and local devotional bhajan artistes. The grand celestial wedding came to an end with Nakshatra Harati followed by Kumbha Harati and Maha Aradhana.
The Celestial marriage has provided a grand spectacle to the eyes of thousands of devotees who converged to witness the colourful wedding ceremony of “Mighty Lord Venkateswara” and sanctified their lives.
H.H.Sri Sri Sri Jayendra Saraswathi Swamiji, H.H.Sri Sri Vijendra Saraswathi Swamiji, TTD Trust Board Chairman Sri K Bapiraju, TTD Board Member Sri L.R.Sivaprasad, TTD CV&SO Sri GVG Ashok Kumar took part in this mega religious wedding of the deities.
———————————————————
ISSUED BY THE PUBLIC RELATIONS OFFICER,TTDs camp in Kanchipuram 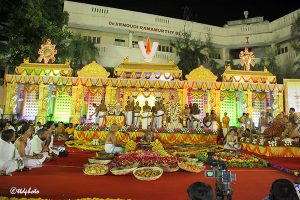 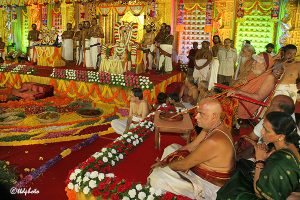 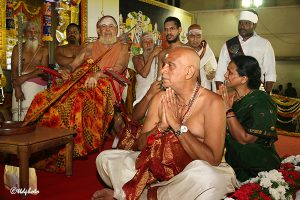 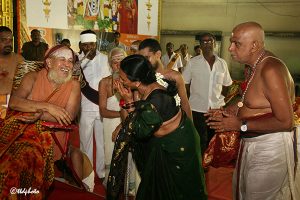 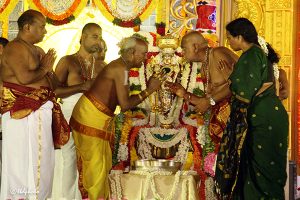