At the main entrance of Tirumala temple, both the seers were welcomed by TTD EO Sri A V Dharma Reddy. After offering prayers to Sri Venkateswara Swamy the senior pontiff was presented with Melchat Vastram while the junior pontiff with Noolchat Vastram as a part of “Cloth Drapery Honour” marking their Deeksha taking ceremony.

Elucidating the importance of Chaturmasya Deeksha, both the seers stated that, it is an auspicious four-month Vrata period starting from the day of Ashada Pournami concluding on Kartika Shukla Pournami. The months of Shravana, Bhadrapada, Ashvayuja and Kartika fall in between this period. These four months are said to be very pleasing to Sri Maha Vishnu. The spiritual persons strongly believe that Dana, Vrata, Japa and Homa performed during this four-month period brings forth countless merits, compared to the noble deeds performed during other months in a year.

After taking Deeksha they went along the four-mada streets in a procession accompanied by their disciples and reached Pedda Jeeyangar Mutt. Some special pujas were performed on the occasion and later felicitated the EO with shawl and prasadams. 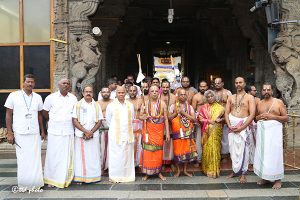 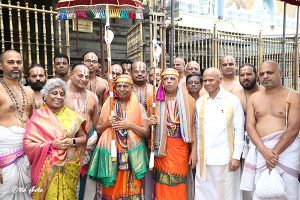 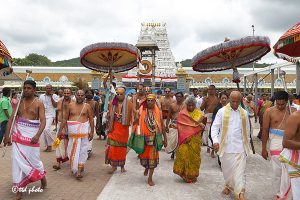 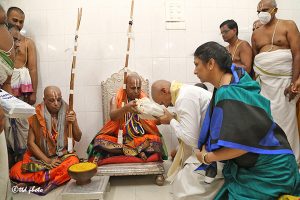