Sri Ghanapathi in his spiritual discourse rendered at Vasantha Mandapam on Friday evening on the occasion of the ongoing “Chaturveda Havanam” programme which is going to conclude on Saturday, he said, “This is a homam of rare sort since it is a Herculean task to complete this homam as it involves Astas, Adyayanas, Anushanga mantras which need to be delivered with utmost dedication and conviction and in a prescribed format by Rig, Yajur, Sama and Adharvana Vedas. Then only it will give fruitful results. Only in Gokarna kshetram, the ritual is being performed from the past three centuries without giving up the ancient tradition. It is indeed a great gesture by the temple administration of Tirumala Tirupati Devasthanams to perform this ritual in the holy land of Tirumala”, he added.

The Vedic maestro said, “The Chaturveda Havana began on Anuradha nakshatra on November 8 and will conclude on Shravana nakshatram, the birth star of Lord Venkateswara on November 13. The successful completion of this homam will definitely yield prosperity to entire humanity”, he added.

Later speaking on the occasion, TTD EO Sri IYR Krishna Rao said, TTD will continue to perform similar homams for the well-being of humanity and for the protection of Sanatana Vedic dharma.

ISSUED BY THE PUBLIC RELATIONS OFFICER OF TTD, TIRUPATI 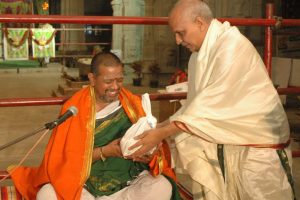 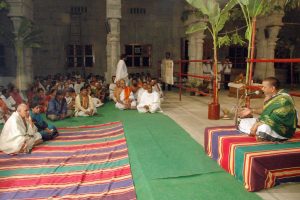