Before taking calls from the pilgrim callers as a part of the monthly ‘Dial your EO’ program held at Annamayya Bhavan in Tirumala on Friday, the EO said TTD has taken up several programs in recent times on Go Samrakshana.

“Starting with Gudiko Gomata so far 60 Cows and calves were donated to temples across the country. TTD is also planning to develop Gosalas located in twin Telugu states of AP and Telangana apart from laying a special focus on Gosala at Palamaner”, he added.

He said already some philanthropists have come forward and donated Gir, Shahiwal, Tarparker, Red Sindhi, Ongole breeds to TTD as a part of our mission to promote Desi cow breed”, EO said.

Further, he said TTD has also ventured in preparing Naivedyam in Tirumala temple out of the products obtained through Desi Cow through natural farming in the name of Go Adharita Naivedyam from May onwards.

The EO also said TTD is mulling to promote awareness among all the dairy four lakh Dairy farmers on the importance of Natural Farming using Desi Cow products. “We have nearly 1000 male cattle in all the three Gosalas of TTD. We are contemplating to produce the Desi cow products by using these cattle in Natural Farming. We are now procuring 7000 tonnes of BG dal for temple utility. We wanted to produce this quantity through Go Adharita Vyavasayam soon”, he maintained.

TTD EO Dr KS Jawahar Reddy also briefed on some important events by TTD in the last few days and shared the same with the pilgrims via Dial your Program on Friday. Some excerpts..

* They are presently available on hand at TTD outlets in Tirumala, Tirupati and Tiruchanoor and also for dispatch by India Posts.

TTD mulling to set up a Sri Vengamamba Aradhana Center at the Vengamamba Brindavana in Tirumala.

TTD plans to organise separate galleries of music instruments, huge vessels, and models of ornaments presented by donors besides former Emperors and kings at the SV museum in Tirumala for educating the devotees on glory and fame of Srivari temple. Tata constructions, Map systems and Tech Mahindra are offering infrastructure and technical support to this project, he added. 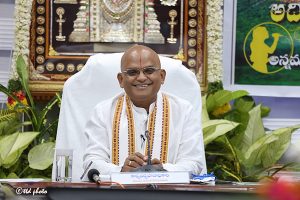 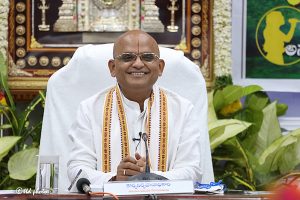