Tirupati, 9 Aug. 20: Brushing aside the rumours by a section of media and some vested interests that TTD has resumed darshan for pilgrims only with an intention to fill its coffers, strongly reacting TTD EO Sri Anil Kumar Singhal said that the Board and management opened up darshan in June upon the requests from the pilgrims and only with a noble intention to satisfy the pilgrims who are longing for darshan of Lord Venkateswara for almost 80 days eversince lockdown in March.

The EO made these remarks, during the monthly Dial your EO programme which was conducted at the Conference Hall in TTD Administrative Building on Sunday in Tirupati. Before receiving the calls from the pilgrims, the EO clarified to the pilgrims that following the COVID guidelines prescribed by the Central and State Governments, TTD resumed darshan for pilgrims from June 11 onwards. “Initially everyone appreciated the move of TTD. But as soon as the cases started increasing in Tirupati, the blame was thrown on us by a section of media, social media and also by some vested persons that we have resumed darshan only to make money. We are spending more money on all facilities of COVID measures rather than what we are making out from pilgrims. Our only intention is to provide hassle free darshan to pilgrims by strictly following the COVID guidelines and satisfy the devotees. So far all the devotees expressed immense satisfaction over the arrangements of darshan, accommodation, Kalyana Katta, laddu, annaprasadam and other facilities made by TTD. They are also following the norms prescribed by TTD. The cases are not increased in Tirupati alone, but the entire state as well the country are facing a similar problem”, he asserted.

EO also clarified that in view of the telecast of Srivari Nitya Kalyanotsagam at Srivari temple between 12Noon – 1 pm, it could not carry the relay of the Foundation ceremony of Ram Mandir at Ayodhya on Wednesday, August 5. “But some people are intentionally involved in damaging the image of TTD encashing sentiments of millions of devotees which is very unfortunate. TTD is abide to the protection and promotion of Hindu Sanatana Dharma only”, he asserted.

Later, the EO stated that so far 743 employees of TTD are tested positive for COVID and out of them 402 already recovered and joined duties while 338 are undergoing treatment in TTD rest houses turned COVID centres at Srinivasam, Vishnunivasam and Madhavam. “Only three employees succumbed to the dreadful virus and we are giving best possible arrangements and treatment to all our employees in the COVID centres. I thank all our employees for offering extraordinary services to the visiting pilgrims”, he complimented.

A pilgrim caller Sri Krishna Kumar from Vijayawada sought EO to send Sugar candy as Prasadam for Online Arjitha Kalyanam Grihastas as it is not possible to send laddus or vadas. He said he participated in Varalakshmi Vratam which was performed at Tiruchanoor in a splendid manner during last week. “We received Uttariyam-Blouse bit-Vermilion-Turmeric and Bangles through the post and were so happy for the arrangement by TTD. But if prasadam like Sugarcandy is also added in the package, the devotees will feel very happy as Divine Gift”, he added. Appreciating the suggestion, the EO said, TTD will include Sugarcandy in the prasadams being sent to online Kalyanotsava Grihastas. On the other hand, answering another pilgrim caller Smt Usharani from Hyderabad, the EO said, it is not possible to send laddu prasadam to the online grihastas through the TTD information Centres located at prime locations in the country. “Online, devotees book the tickets from various places. We have to go ahead with uniform policy”, he said.

Answering pilgrim caller Sri Prasad from Anakapalle who told EO that they have not received any refund, as they could not make it for Tirumala as their area fell under Red Zone. Answering the caller, EO said, we provided a refund for tickets which were booked only during the lockdown period. After darshan resumed, that provision will not apply. We have many times informed the devotees that they should book the tickets subjected to the prevailing conditions in their respective areas”, he said.

When Sri Badrinarayana from Salem sought EO that he had booked Tiruppavada Seva in 2009 and the date of Seva allotted to him was on 23rd October this year. When and how shall he get the ticket. To which EO said, as per the existing COVID guidelines, TTD has cancelled all arjitha sevas for pilgrims and has been performing them in Ekantam as there is not enough space to accommodate pilgrims inside the sanctum in the prevailing situation. “When the situation turns to normalcy, we will inform you of the procedure”, he maintained.

A devotee Sri Vinaya Krishna from Hyderabad asked EO about the procedure to donate a golden chain with a locket which he prepared for Tiruchanoor Sri Padmavathi Ammavaru, the EO said the concerned officers will provide him information later.

Giving clarification to the query of Sri Sunil Kumar from Nellore who asked EO about the employees belonging to other faiths working in TTD, he said, “There was no restriction over their appointment until 1989. Though the amendment was brought after 1989, that was implied only to temples alone. Again in 2007, an Act was enacted saying that only those who profess Hinduism alone will be employed in TTD. When we tried to send back the 45 employees currently working in TTD belonging to other religions, to other state government departments, they approached the High Court. Since the issue is under the judicial purview I will not respond. But we are strictly acting on those if anyone who professes other religious faiths working in Hindu Institution”, he added.

He thanked callers Sri Venugopalachari of Hyderabad, Sri Vijayakumari from Hubli, Smt Prasoona from Hyderabad, Sri Murthy from Visakhapatnam for appreciated all the programmes in SVBC and especially the Sundarakanda Pathanam and Virataparva Parayanam. The devotees complimented TTD for telecasting such spiritual programmes on SVBC and providing them at relief during the COVID pandemic situation. The EO also said the programmes like Garuda Puranam and Bhagavat Gita will also be introduced soon on SVBC. He said, the suggestions like Annmaiyya Paata – Prativaari Nota, Shloka-Pranayamam etc. learning as sought by pilgrims will be discussed during the upcoming SVBC board meeting.

When a devotee Sri Sachin Kumar from Aurangabad of Maharashtra sought EO to commence the Electronic dip tickets as the lockdown norms were relaxed across the country, the EO said, though the lockdown norms were relaxed still there are restrictions on religious congregations. “In Suprabhatam, Tomala, Archana etc.we issue 120 tickets and there is very little space to accommodate the pilgrims following COVID guidelines if we start them now. Apart from this, we have cancelled the lucky dip ticket holders who booked during the lockdown period and also there are still pilgrims who are awaiting for their turn of Seva, who booked some decade ago”, he said. 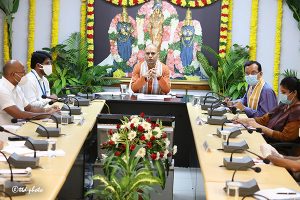 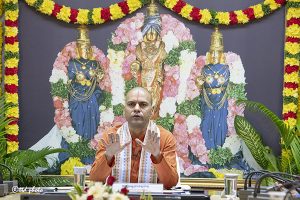