Tirupati,14 December 2022: TTD JEO Sri Veerabrahmam has directed the officials concerned to speed up the gold plating works of Sri Govindaraja Swamy temple Gopuram and complete the works on war footing as per schedule.

He inspected the jewellery wing of TTD at Sri Govindaraja Swamy temple along with FA &CAO Sri Balaji and CE Sri Nageswara Rao on Wednesday and also the ongoing gold lacing works.

Officials informed the JEO that 50 gold smiths were deployed for the task. JEO  asked the CE to organise as many as five workshops needed for goldsmiths by shifting the offices in the temple to speed up works.

During his tour, JEO also interacted with goldsmiths and urged them to complete the divine work with total devotion.

Later he inspected the vacant rooms in the TTD’s Old Huzur Office Complex and directed officials to repair and use them as storerooms for the goldsmiths to keep copper plates, bronze etc.

He also directed them to remove scrap materials. He also inspected the Panchaloha materials wing where he directed engineering officials to make it spacious with proper ventilation.

EE Sri Venugopal and AEO Sri Subbaraju and others were present. 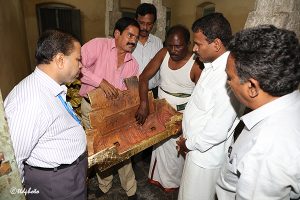 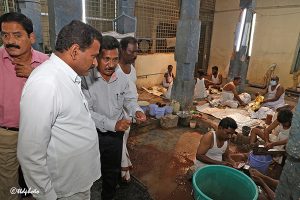