Tirumala,5, November 2022: TTD EO Sri AV Dharma Reddy said on Saturday that elaborate and extensive arrangements were being made for the grand and smooth conduct of the annual Karthika Brahmotsavam of Sri Padmavati temple, Tiruchanoor from November 20- 28.

Addressing the monthly Dial Your EO program at the Annamaiah Bhavan, the TTD EO said significant events of the fete were Gaja vahana on Nov 24, Garuda Seva on November 25, Rathotsavam on 27, Panchami thirtha on 28 and Pushpayagam on 29.

He said that anticipating massive crowds on November 28, for the Panchami thirtha fete, which is being held in public after three years of pandemic Corona, TTD is making elaborate arrangements.

TTD issued 25,000 tokens on Saturday, Sunday and Monday and 15,000 tokens during other weekdays.

The counters were closed after the quota was Devotees with tokens could have Srivari Darshan on the same day and arrangements were made for those without tokens could also have Darshan through Vaikuntam queue complex-2 directly.

Devotees with tokens were advised to come t queues at allotted timings only.

Gradually the number of tokens will be increased after correcting the lapses in the token issue system.

Devotees are allowed to take options once a month for Srivari Darshan only.

With the objective to provide early Srivari Darshan to devotees who made the nightlong wait in queue lines, TTD intends to change the timings of VIP break Darshan from December 1 to 08.00 am.

With this initiative, those in queue lines could get Darshan ahead of VIP ticket holders.

Donors will be given break tickets at Madhavam in Tirupati and also rooms to reduce pressure on accommodation at Tirumala.

A four-day Vishnu puja at Vasantha mandapams from November 4 onwards with live telecast on SVBC.

TTD is conducting the annual Kaishika Dwadasi Asthana at Srivari temple on November 5.

The utsava idols of Urga Srinivasa Murthy also called as Snapana bera along with consorts is paraded on holy Mada streets before sunrise and blesses devotees.

TTD shut down the Srivari temple on November 8, Tuesday between morning 8.40 am to night 7.20 hours due to a lunar eclipse.

Hence all Darshan tickets: Srivani, ₹300, break and arjita sevas stand cancelled and only Sarva Darshan is allowed when the temple reopened.

On November 9, TTD is organising the Srinivasa kalyanam fete at Ongole on the ground in front of KWIS engineering college.

With an objective to take up, the Hindu dharma campaign all over the world TTD is conducting the Srinivasa Kalyanam fete in UK and Europe from October 15-November 13.

The Holy event is being held now at Frankfort at Germany on November 5, at Paris in France from on Nov.6, in London in UK onNov.12 and finally at Edinburg in Scotland on 13th.

As per the directions of Honourable AP CM Sri YS Jaganmohan Reddy, TTD is committed to make Tirumala pollution free.

As part of the campaign, TTD has decided to operate electric buses in place of free dharma Rathas in Tirumala for devotees benefit.

PAST GLORY FOR TIRUMALA FLOWER GARDENS

TTD intends to enhance the pleasant ambiance of Tirumala with green landscaping and flower gardens all around the hill shrine .

Already Gitopadesham park is developed from GNC gates to the bus stand on the left side, Namala park at Shanku Metta, gardens inside VQC and near Sri Padmavati rest house junctions.

Further another garden is being developed in the next two months near a Special type Narayanagiri rest house. 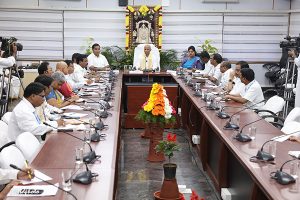 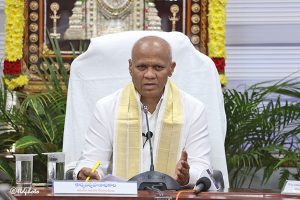 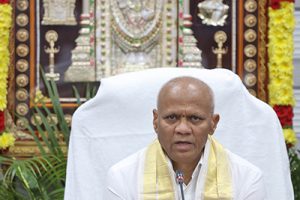