Tirumala, 13 March 2016: Usually every day is a festival day in Tirumala as nearly 450 festivals are being observed round the year.

But if five festivals fall on a single day, then the joy of pilgrim devotees knew no bounds. Such a rare incident is set to occur in Tirumala on March 23 giving a spiritual treat to the pilgrims. The advent of Phalguna Pournami is on this March 23 which also happens to be the Holi Day-the auspicious Vasantha Panchami. On the same day, Tumburu Teertha mukkoti will take place and it the last day of annual teppotsavams. While, the day is considered significant especially for Hindu women, since Lakshmi Jayanthi is also observed.

On the whole March 23 is going to be a big day for tge multitude of pilgrims visiting Tirumala. 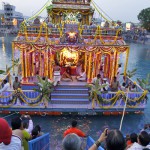 « JEO INSPECTS QUEUE LINES IN TIRUMALA » About 84,507 pilgrims had Srivari Darshan on March 13