The monthly Dial your EO programme was held in TTD Administrative Building at Tirupati on Saturday wherein TTD EO Dr KS Jawahar Reddy interacted with 23 pilgrim callers and received suggestions and feedback from them.

Before taking the calls from pilgrims, the EO briefed on some important decisions and development activities taken up by TTD. He said, after receiving huge reception for all its spiritual programmes including Parayanams, TTD will commence yet another significant puranam given to the mankind by Hindu Sanatana Dharma, the Garuda Puranam from next week onwards.

Briefing on some of the important upcoming events in Tirumala, the EO said, Sri Varaha Jayanti will be observed on September 9 while Sri Ananta Padmanabha Vratam on September 19.

The EO also briefed on the recently introduced Navaneeta Seva in Tirumala on the auspicious day of Gokulastami on August 30. He said the butter extracted from the desi cow is being carried by Srivari Sevakulu in a procession to the Srivari temple from SV Gosala at Tirumala

TTD plans to ban diesel & petroleum vehicles in a phased manner in Tirumala and has commenced all-out efforts to maintain it as a holy and green hills. In the first phase, 35 electric cars (Tata Nexon) were bought for official uses. Plans afoot to convert RTC buses between Tirupati-Tirumala and private taxis also on electric mode.

The DRDO made eco-friendly Laddu Bags from the starch of corn for devotees in addition to cloth and jute bags and environment-friendly covers by Green Mantra which is now available at Tirumala in place of banned plastic bags.

TTD to commence gold lacing of the vimana gopuram of Sri Govindaraja Swamy temple from September 14.

TTD is organising virtual Pavitrotsavam at the Sri Padmavati temple, Tiruchanoor from September 18-20 and live telecast by SVBC for benefit of devotees and online sale of virtual tickets already started.

The sale of agarbattis made from used flower garlands at all TTD temples will begin on September 13 at Tirumala.

The famous Kavitraya Mahabharatam consisting of 15 volumes and cost Rs.4000 are republished on public demand along with Roots-an English publication on Vedas at Rs. 850 readily available at all TTD publication outlets in Tirumala and Tirupati.

TTD is bringing out a newly designed Sapthagiri Magazine with an attractive cover page and incisive articles from October onwards.

The prestigious diaries and calendars of TTD will be available to devotees from October itself.

TTD is organising the Sri Srinivasa Panchahnika Chaturveda Havanam at the Mysore Datta Peetham on the request of Sri Ganapati Satchidananda Swami from September 1-5 for the welfare of humanity.

While the parayanam Diksha is held at Vasantha Mandapams by 16 Vedic pundits, another team of 16 pundits performing homas, japam and tarpanam at the Dharmagiri Veda vijnan peetham simultaneously.

The spiritual and dharmic programs were held during the auspicious months of Karthika, Dhanur, Magha, Phalguna, Chaitra, Vaishakha, Jyesta, Ashada, and Shravana have earned devotee appreciation. Similarly planning many events in Bhadrapadam also

TTD is all set to launch the Kannada and Hindi channels of SVBC in the month of October.

An unique program, Veda-Jeevanadam will be telecasted on all Saturdays and Sundays at the prime time highlighting scientific interpretation of Vedas.

TTD plans to conduct a contest in Annamaiah sankeetans for the youth of Karnataka and Tamilnadu apart from Telugu states as well under the title Adigo- Alladigo. These programs shall be conducted initially at districts and finally at the state level at the SVBC studios of Hyderabad and Tirupati.

The works will be completed and the Alipiri footpath will be opened by annual Brahmotsavams in October. 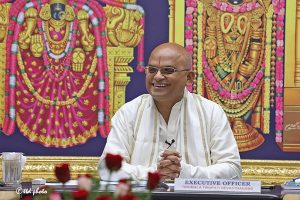 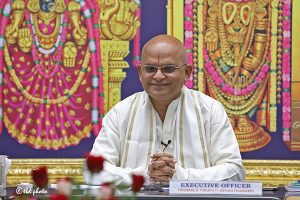