PLEDGE TO REVIVE GOPUJA-TTD BOARD MEMBER

The board member who took part in Gopuja in SV Gosamrakshanashala organised by HDPP wing of
TTD expressed his serious concern over the cruel treatment being meted out to the bovine. “In our Hindu dharma, the cow is considered as next to Mother and being worshipped as the embodiment of all the deities. The significance of Gomata and Govinda is clearly stated in Venkatachala Mahatyam and Varaha Puranam. But today it is facing the ill treatment because of some anti-social elements. In order to put an end to this mean menace and bring back the past glory to Gomata, we have observed Gopuja across the Telugu speaking states under the aegis of HDPP wing of TTD today”, he maintained.

Adding further he said TTD is committed to set up a Saptha Gow Pradakshina Shala in Goshala premises so as to attract the devotees to perform pujas to Go Mata as per age old tradition.

GOPUJA ACROSS 500 TEMPLES IN TELUGU STATES:

TTD has chalked out an action plan to perform Gopuja on the penultimate day of Sankranthi every year in the month of January, in about 500 temples spread across Telugu speaking states, said TTD Tirupati JEO Sri P Bhaskar.

He said as a part of the resolution taken under the recently held Dharmika Sadas by Hindu Dharma Parirakshana Trust(HDPT) Gopuja has been observed in all the TTD temples. “TTD is committed to protect gomata”, he reiterated. 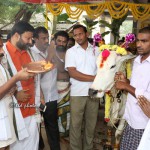 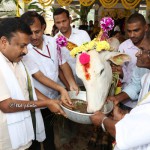 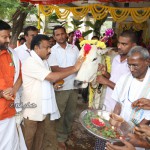 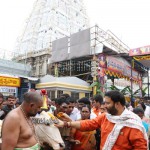 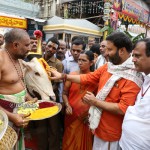