Tirupati , September  19: It is delightful sight  at  the Nittya Annadanam complex  Tirumala. A week ahed of  Brahmotsavam,  the  TTD has been feeding  nearly one lakh  visitors to  Tirumala   freely .TheAnnadanam complex  started working from morning eight am to facilitate the thousands of pllgrims  who had waited in que  for over  24 hours  from the beginning of the annual festival at Tirumala.

“We appeal to all devotees to be patient as we are making all arrangements to provide free food, and laddu prasadam and sarva darshan for all  “ says  the Executive Officer of TTD, Sri. I Y R Krishna Rao .

In spite of recession   and   hike in costs of  transport  services  etc  the rush of pilgrims is  every increasing  day by day and the TTD and the state government officials are gearing up on a war footing to ensure that  everyone got the  benefits of  all the  welfare initiatives of Lord Venkateswara  like  free meals,  free prasadam,  free darshan  and also free accommodation . .

India is a country known for its hospitality and charity to  poor disabled and destitutes .Since Centuries  the  religious shrines  had become the  institutions to deliver such social justice for the  have not’s  aimed at   providing  them food  and social security.

The shrine of Lord Venkateswara at  Tirumala  administered by the  Tirumala Tirupati Dewasthanams (TTD) has  set  another innovative and epoch making  initiative to reaffirm the country’s continued  faith in traditional values  and its  unstinted practice . For the Brahmotsavcam of  2009,  it  proposes to provide  free meals  every day  for all nine days  to a mimum of  one to  two lakh devotees per day . “ We are not limiting the  numbers .Every hungry devotees will get  food  any time of the  day or night  during Brahmotsavam ‘ says  Krishna Rao.

The popular  pilgrim town has set a record of sorts by offering two free meals on  24×7 basis to its  visitors  irrespective of caste or creed and also without questioning them as to whether they visited the temple and had darshan or not .The  meal, though simple is appreciated  by  visitors including foreigners, tycoons and  first timers as not only hygiene  but also tasty . “Every one- both rich and poor want to partake meals at  the huge  Annadam  complex as prasadam of the deity” say the authorities.

What began as a scheme  launched by a devout  donors’ penance to feed   poor at Tirumala  in memory of  his beloved elders on  April  6th, 1985 had  today grown into  an institution with a corpus  as huge  as  over  Rs. 175 crore  and a  budget  equivalent of  that of  several  union territories  in the country .

What began as a poor feeding  for just   2000 persons   23 years ago has  today catapulted into  massive  Nitya Annadanam program for every pilgrim  who visited the country’s  most revered  religious shrine at Tirumala which is perhaps  the only such   institution which had  laid out an multi-pronged  approach  towards  protection and preservation of Hindu Dharma  not only as an spiritual and religious issue  but also as a service to the society .

The  “Sri Venkateswara Nithya  Annadanam Trust “ founded  on April  1st, 1994  had    developed   potential and where-with-all to  provide  decent, hygienic and wholesome meals  twice  a day for all pilgrims   who set their foot  on Tirumala irrespective of whether they had  darahsn of the presiding deity Lord Venkateswara  or not . “What is  important to us in the TTD  is that  everyone who comes to this holy place , by walk or  by  any other transport need not  suffer  out of  exhaustion or hunger and could have darshan of deity at their convenience “ says   I Y R Krishna Rao Executive Officer of TTD.

The scheme launched with a small donation  of a philanthropist  for about  2000 poor and needy pilgrims had today grown into a  huge  organization with capability and infrastructure to feed a minimum of 35,000 week days, and around 40,000 on week-ends and holidays. The Trust with a corpus of Rs.175 crore is one of the most popular schemes of the TTD  as it touched  the basic need of the pilgrim- for  cheap, safe food and yet served with dignity and  humility  by scores of Srivari Seva volunteers .

Smt  T. Chenchu Lakshmi , who is in charge of the Annadanam scheme  says that  right now  there were nearly 500 donors  who had contributed to the kitty  of the Trust  which has undertaken  several  programs  including  Nitya annadanam  .

But every passing day  donations   are pouring in for the corpus  from devotees for the corpus . “Earlier we had donors for building guest rooms, Now we have more offering funds for Annadanam”. She says that the dining halls of  the annadanam complex are full anytime of the day with pilgrims. The rich and poor partake free meals as they consider it as prasadam of Lord Venkateswara in view of Its hygienic preparation and  cleanliness in delivery .

Every day  each devotee  enjoyed  a six  course  lunch /dinner  to their tummy’s fill . The menu included – Sweet pongal ( prasadam), vegetable curry , Chatni  , Sambar  , Rasam and  Rice . However from  August 1st, the TTD administration added  Dal  and ghee to balance the food  nutritiously  on advise of  specialists from National Institute of Nutrition .

The donors for the scheme had special benefits in accommodation, laddu prasadam and also darshan of the presiding deity once in a year. Donations could range from any multiplies of Rs.1000.

A donor from West Godavari district has come forward to construct a state of the art complex to set up hygienic and modern kitchen and dining hall for the Annadanam Trust at Tirumala at a cost of Rs. Twenty crore .

With the new  complex  the  TTD authorities say that they could  feed nearly  4000 pilgrims  in one single batch .The ultra modern kitchen will also have capacity to cook rice, dal, sambar  and others  faster  to  facilitate the huge crowds anticipated in the coming years. L & T has been chosen to build the ultra-modern complex including its kitchen and the dining hall for which designs were prepared by global experts.

By the normal standards in the present kitchen 12 huge vessels are steamed to produce rice at the rate of five persons for one kg rice. “But we are geared to cook rice for one to two lakh persons during the Srivari Brahmotsavam at the rate of 400 bags of rice per day”

Smt. Lakshmi says that  besides Annadanam, the TTD  undertook to provide sumptuous feed of  upma, milk, curd rice , butter milk and sambar rice on a  two hours  cycle to the thousands of  devotees  who waited in the Vaikuntam  que  complex for hours .

“ We gave them some food items  from early morning hours  of  3.30 AM to midnight to ensure that none of the pilgrims who waited in the serpentine  ‘Q’ complexes ( 30 compartments in Vaikuntam ) suffered of hunger  or  thirst as they waited  in hot sun, rain and  in unearthly hours  for the darshan of Lord Venkateswara “ .

On the occasion of the ensuing  Srivari  Brahmotsavam  fromSeptember  21st , the  TTD plans  to provide more  amenities  like food packets, water and butter milk  packets    to devotees waiting in Vaikuntam complex’s as they anticipate much larger crowds . “We are ready to take on  any number of devotees  as this if the second year of our free meal program and we made all arrangements  to ensure that the pilgrims  did not suffer  during the  ten days of the Srivari Brahmotsavam “ says the Executive Officer Rao .

The scheme has already attracted donors in kind and cash . Vegetable growers of Madanapalli, Chittoor, Bangalore  and Chennai are sending vegetables free to the Annadanam trust  daily. “We used to spend nearly Rs.50 lakhs on just the vegetables in the past “says Chencu Lakshmi .  But  the TTd spends  hardlt  Rs. 15 lakhs  rest are all by donation .

As part of Annadanam scheme food packets are also prepared for distribution for the pilgrims who come by foot in the middle of their journey both at the  Padala Mantapam  or Gali Gopuram  .They are also provided water and other basic amenities. Food packets are also prepared and delivered by volunteers for all those in the temple, hospitals, administration, security and transport wings. “We supply nearly 5000 packets on week days and 10,000 days on week-ends “, she says.

The TTD has also set in motion a process to provide clean and pure water to pilgrims.  It has now permitted some philanthropists to provide mineral water plants in Tirumala at a cost of Rs. Five crore. “The plant will have capacity to provide pure and hygienic drinking water at the rate of  one lakh liters per day and  the pilgrims will have to just pay Rs. One per liter”.

The TTD has attached great importance and priority to –provide clean and safe drinking water to prevent spread of diseases and hardships to pilgrims who come with a divine hope and blessing. Particularly in view of the growing menace of Swine Flu and Dengue fever the TTD has also banned use of plastics bottles on Tirumala . Special arrangements were made for setting up water kiosks and clean drinking outlets all over Tirumala during the current Srivari Brahmotsavam. 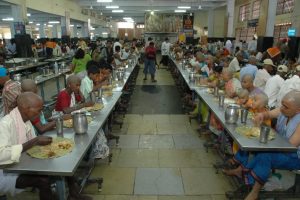