Tirumala, August 30: The Tirumala Tirupati Devasthanams will commence the current sale of arjita Seva tickets from September 1st for benefit of common devotees on a first-come first-served basis.

This was announced by Sri J.Sathyanarayana, Chairman of Specified Authority who took over the charge of the office at Tirumala today.

The Number of arjita tickets which will be put on current sale from Wednesday are as below: Suprabatham – 100 tickets, Kalyanotsavam -100, NijaPada Darsanam -100, Unjal  Seva – 100, Arjita Brahmotsavam -25, Vasantotsavam-25, Sahasra Deepalankarana Seva -70

Sri J.Sathyanarayana IAS took over as Chairman of Specified Authority in front of the presiding deity of Lord Venkateswara at Tirumala Monday morning in the auspicious muhurtam between 6 AM to 7 AM

The chairman and members of the Specified Authority also addressed a meeting of the  Heads of Departments ( HOD) after the first session of the Specified  Authority after taking charge of the office and urged everyone to collectively strive in the service of  Lord Venkateswara and serve the common devotees and also observe transparency in their functioning.

Speaking to reporters later Sri Satyanarayana said that the task of Specified Authority was to ensure the confidence of devotees in the TTD administration and see that the devotees who come to Srivari Temple fulfil their purpose of visit to Tirumala.

He also urged the TTD officials to make foolproof arrangements for the successful conduction of the Brahmotsavams and provide hygienic sanitation in and around Tirumala and take all precautionary steps against the threat of Swine Flu.

Later the specified authority chairman and members has offered worship of Lord Venkateswara and darshan. The High Priests of Srivari Temple amid chanting of Vedic Hymns invoked a divine blessing upon the New Chairman and the members. 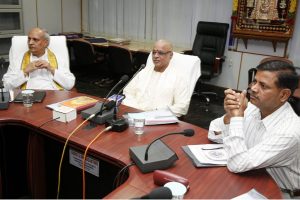 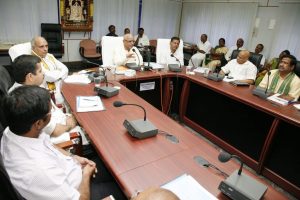 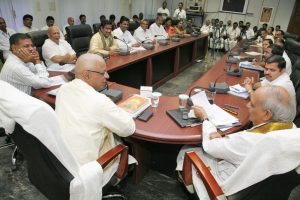