Tirumala,17 September 2022: The Annaprasadam Wing of TTD has been serving free food to tens of thousands of visiting pilgrims every day for the past three and a half decades and is considered the most significant charity by the temple management.

The saga of Annaprasadam has been continuing its unstoppable journey since 1985 irrespective of the flow and hours of devotees at the hill shrine. However, the credit goes to the great Telugu Saint Poetess of the 18th Century, Matrusri Tarigonda Vengamamba who pioneered Annaprasadam in Tirumala by serving free food as a hunger relief to devotees who came to Srivari temple nestled in thick forests about three centuries ago.

Legends speak that she used to organise drinking water and Anna Prasadam distribution during the Sri Narasimha Jayanti festival in the Vaishaka month at Tirumala for ten days. The edicts speak out on land granted to her by kings from Dindigul to Golconda.

As a tribute to the stellar contribution of Vengamamba, the TTD has named the massive Rs.35crore Annaprasada Bhavan after her as Matrusri Tarigonda Vengamamba Annaprasadam Complex (MTVAC) which was opened in 2008 on July 11 by the then Honourable President of India, Smt Pratibha Patil.

With ultra-modern cooking systems and dining halls to accommodate 4000 devotees at a time the MTVAC is serving Annaprasadam to 65000 pilgrims every day and nearly one lakh pilgrims during festive days like Brahmotsavams, Radha Sapthami, Vaikuntha Ekadasi etc.

In 1933, when TTD took over the Administration of Srivari temple, it made a small beginning in catering to the hunger needs of devotees with a canteen providing snacks at a fair price. Later in 1965, a canteen was set up at the Mandapam where Akhanda Harinama Sankeertans are held now. In, those days Idli was priced at 10 paise, vada at 15ps, tea and coffee at 25ps and masala dosa at 40ps and meals at ₹1.

However as daily footfalls to Tirumala galloped, TTD made efforts to provide free Annaprasadam to devotees and in 1985 the then CM of united AP Sri NT Rama Rao launched the limited free Annadanam scheme with a ₹10 lakhs donation by a devotee LV Ramaiah.

As per the scheme free meals tokens were issued to devotees after Srivari darshan. What began with 2000 free meals shot into 14,000 and 20,000. Meals were served to 1000 devotees at a time in two halls and by 2008 the daily number crossed 1 lakh(including compartments and queues).

Besides MTVAC, TTD organised cooking at other locations also in Tirumala viz. in Vaikunta queue complex 1,2 and Outside queue lines and Food counters at PAC-2. TTD organised the cooking of Sambar Rice, Upma, Pongal and Pulihora.

Raw material for all preparations is tested at the Tirupati marketing godown before being dispatched to the Anna Prasadam department. Every day 10-12 tonnes of Rice, and 7-8 tonnes of vegetables are being utilised after they are cleaned, cut by Srivari Sevaks and sent to all kitchens. Srivari Sevaks also serve and distribute food to devotees at queue lines and also at MTVAC and food counters across Tirumala.

Since the funds of the SV Nitya Annaprasadam, Trust has crossed ₹1502 crore and it has become self-reliant now,  TTD has stopped giving grants to Annaprasadam since 2018.

To provide tasty and healthy Annaprasadam to the multitude of visiting pilgrims, TTD now intends to provide more nutritious food to devotees with organic vegetables produced from Natural Farming techniques. A meeting was convened with Organic Vegetable Farmers of Rayalaseema Region recently by TTD.

During normal days the MTVAC functions between 9 am to 11 pm while during important festival occasions like Garuda Seva and Vaikuntha Ekadasi,  8 am till 1 am the next day.

With its tireless services, the Annaprasadam wing of TTD is being credited as “Akshaya Patra”-the divine never depleting food supply vessel, serving millions and millions of pilgrim public with delicious food items. 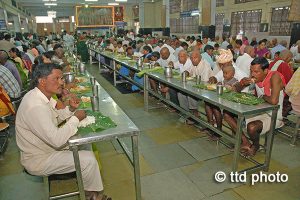 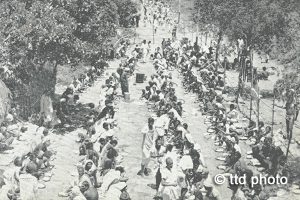 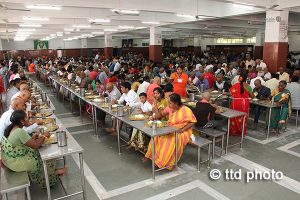 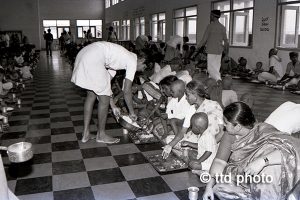 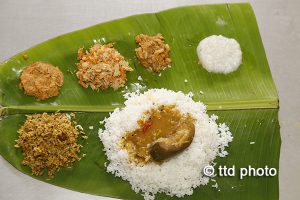 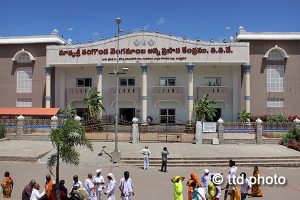 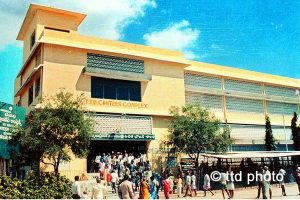 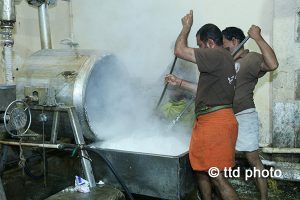