TIRUPATI, NOV 23:  The TTD-run Sri Venkateswara Veda Viswavidyalayam should become a coordinating body of all Vedic varsities of the country and should put efforts for the spreading of Vedic knowledge in the society.

Addressing the conclave of Vedic students on the occasion of the three-day Youth Festival-“Veda Vidya Yuva Chatra Samaroham 2010” which commenced in Rameshwara Bhavan at the Vedic varsity in Tirupati on Tuesday, the former TTD EO in his key note address felt that there is an urgent need to bridge the gap between Vedas and society. “Majority people are of a misconception that Vedas are constrained to only a section of the community. The vedic varsity should take that responsibility of clearing this fallacy among the public. Vedas are not restricted to spiritual chanting of mantras alone. In fact the rich hidden treasure in Vedic mathematics, Vedic architecture and Vedic sciences should go to the public so that the people will develop credibility in our ancient literature”, added.

Further he strongly opined that the university should develop in the field applied programme also. “Use the Vedic knowledge to over come the poverty and sorrows in the field of agriculture apart from taking up wide range of research works in the university. There are systems and solutions which are mentioned in Vedas to over come any sort of crisis or calamity. If you could make use of this knowledge, then the Vedas will become an integral part in the society”, he said.

Later addressing the occasion, the district collector, Sri V.Seshadri who graced the function as chief guest said, that though the Vedas are considered to be 5000 years old, they are still young and fresh due to their relevance even to the modern day society. “Even today various scientific inventions and discoveries are emerging out of the Vedic knowledge. Vedas not only explores the origin of universe but also the relation between man and creator. So Vedas will long last as long as the humanity lasts and the vedic knowledge is immortal and eternal”, he maintained.

The Collector also felt that in spite of the fast changing times, the ancient study of Veda could be able sustain its legacy and today many Vedic universities have come across the country, which is a welcoming and healthy change. “Today in many schools we are teaching fundamentals of Vedas so that the children will be made aware of rich Vedic heritage”. He asked the Vedic Varsity to be a torch bearer of Vedic knowledge in the society.

Earlier the varsity VC Sri S.Sudarshana Sharma said the four-year old young university will pioneer the cause of safeguarding vedic knowledge in the country and explore new ways and means to reach the people at large.

The vedic students will present and perform ancient educational arts like “Shalaka”, Arohana-Avarohana, Chitralekhanam etc in the thee day festival which will conclude on Thursday. 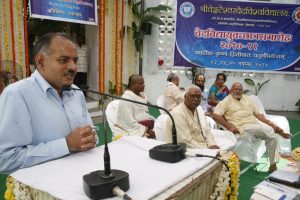 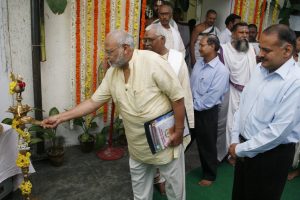 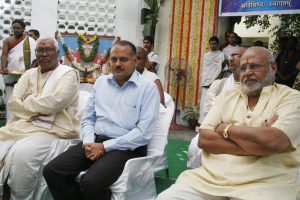