TIRUMALA, AUGUST 1:  In the wake of twin brahmotsavams of Lord Venkateswara this year which are scheduled to take place in the months of September and October, TTD has began the repair works of Swamy Pushkarini on Wednesday. These works will last till August 31 and as a result TTD has cancelled Swamy Pushkarini Harathi till the work period.
It is a usual custom in TTD to take up the repair and renovation works of the temple tank which is located adjacent to main shrine every year, one month prior to Brahmotsavams. As this year the brahmotsavams are scheduled for 18th September to 26th September and 15th October to 23rd October, the Water Works wing of TTD Engineering department began the repair works from Wednesday.
Meanwhile the temple tank has a capacity to hold one crore litres of water. As a part of the cleansing mechanism, the staffs of Water works department will pump out the entire water, take up the repair and colouring works. The temple tank will get ready with its new look by September 1.
ISSUED BY TTDs PUBLIC RELATIONS OFFICER, TIRUPATI 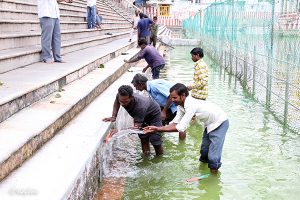 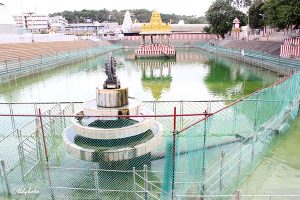