TIRUMALA, DECEMBER 24:  After smoothly and successfully carrying out the two major events of annual brahmotsavams and Mukkoti Ekadasi by providing a hassle free darshan to pilgrims in spite of record turnout, the temple administration of Tirumala Tirupati Devasthanams(TTD) is now gearing up to tackle the new year rush.

Briefing the media persons about the darshan and accommodation arrangements at Annaiamaiah Bhavan in Tirumala on Friday, the TTD executive officer Sri IYR Krishna Rao said the VIP darshan will commence by 2:30am and the delegates are requested to report exactly by 1am on January 1st 2011. “The VIP darshan will continue from 2:30am to 4am and it will be immediately followed by Sarva Darshan”, he added.

“The Sarva Darshan to pilgrims will commence by 4am and will continue till Ekantha Seva while the Pratyeka Pravesha Darshan(Special Entry Darshan) will commence by 6am. The Supadham entry for employees will be open from 10am to 6pm and no special darshan will be entertained for the parents with infants, specially abled (physically challenged) and aged pilgrims”, EO maintained.

The Executive officer said, that the temple management has decided to rationalize the existing system of seva tickets to bring uniformity in all the Arjitha sevas. As a part of it, except the Kalyanotsavam ticket all the other arjitha seva tickets including Daily utsavams, weekly sevas and annual sevas will be henceforth issued on individual basis without hiking the existing prices. However the system of on-line booking of Arjitha Sevas through internet and at e-darshan counters  will come in to effect from January 1 while the booking of these sevas through DD will commence only after April 2011. On the accommodation side, to bring more transparency in the existing system, he said, TTD has decided to charge 100% from the pilgrims if he does not vacate even after 48hrs. The pilgrim will be charged 200% if his stay exceeds 72hrs-96hrs. This will also come in to effect from the New Year Day of 2011”, EO maintained.

The press conference was attended by Jeo Tirumala, Sri P.Bhaskar, CV & SO Sri MK Singh and other officials and HODs of TTD. 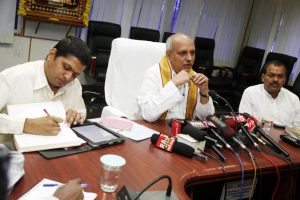 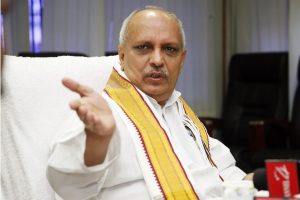