TIRUMALA, 11 NOVEMBER 2021: Based on its historical significance, predominance and importance in all the rituals performed in the temple of Sri Venkateswara Swamy, TTD has recognized and notified, Sampangi-Magnolia champaca as the Sthala Vruksham of Tirumala.

In the recent times, TTD under the instructions of Executive Officer Dr KS Jawahar Reddy has developed Sampradaya Gardens in Tirumala which included the flowering plants and trees as mentioned in various Puranas that have a mention about Tirumala.

Among the divine flowers which adorn Sri Venkateswara Swamy during every day rituals, Sampangi scientifically known as Magnoia champaca, plays a pivotal role.

In fact the 33 and 34 shlokas from Chapter 13 of Bhavishyottara Puranam says that Sri Srinivasa Himself advised Emperor Tondaman not to remove the Sampangi Vanam while constructing the Prakaram.

Keeping in view the importance of Sampangi flower in the offerings of Tirumala temple, it is notified that Sampangi is Sthala Vruksham of the Temple Town of Tirumala. 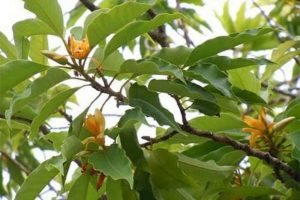