TIRUMALA, DECEMBER 3:  Being the custodian of the “Hindu Sanathana Dharma”, the temple management of TTD is sought to promote the “Go Samrakshana” among the pilgrims to safe guard cows from ruthless slaughtering.

This issue has come to the fore in the monthly “Dial your EO” programme held at Annamaiah Bhavan in Tirumala on Friday morning.

Reacting positively to the request raised by Smt.Sridevi from Kadapa who sought the intervention of TTD for the transportation of cows to TTD-run Sri Venkateswara Go Samrakshana Shala in Tirupati and prevent the butchering of cows which is on a happening on a large scale in Kadapa, the TTD EO Sri IYR Krishna Rao assured to take necessary steps.

Responding to the suggestion of Mr.Chaitanya from Tirupati, The EO has directed his officials to henceforth perform Unjal Seva in Vaibhavotsava Mandapam in the case of inclement weather conditions

The EO Sri Krishna Rao clearing the doubt raised by a pilgrim Suresh from Kadapa whether it is mandatory to take four laddus in queue lines, said that there is no such rule and the devotee can take even a single laddu.

On the request of Smt Prameela from Rajamundry to ban distributing laddus in plastic covers, the EO said, TTD is already on the job and searching for an alternative to replace plastic covers and assured that Tirumala will be soon made a “Plastic Free Zone”.

Over the suggestion made by Sri Ramesh from Hyderabad to implement dress code for Private taxi drivers and to see that they play devotional songs in their vehicles, the EO has positively reacted to it.

When Sri Ravishanker from Guntur sought the EO to maintain quality of food in motels and hotels in Tirumala, the EO immediately directed the officials to initiate necessary measures to see that the food supplied be qualitative.

Quickly responding to the suggestions made by Sri Mohan Rao of Hyderabad over the menace by vendors in queue complex and for installation of an emergency button alert system the EO directed the vigilance staff to increase the surveillance to prevent the vendors menace and also to look in to the button system.

When Raja of Guntur and Venugopal of Hyderabad of requested to update the availability of sevas for January next on internet, the EO said the updates will be open from December 13 onwards.

When Sri Vasudeva Rao from Machilipatnam suggested TTD to see that enough publicity and assistance be given to the families of the designers Sri Narayana Gupta and Sri D.Raghava Rao (of 1950 for desigining Rs.10 Sri Venkateswara calendar), the EO said they will look in to the issue.

Over the request of Sri Chennakeshavacharyulu of Guntur to light ghee lamps in the temple of Sri Kalyana Venkateswara Swamy at Srinivasa Mangapuram, like in Srivari temple at Tirumala, the EO said he will discuss with officials about the issue.

The meeting was also attended by JEO (Tirumala) Sri K.Bhaskar and other officials. 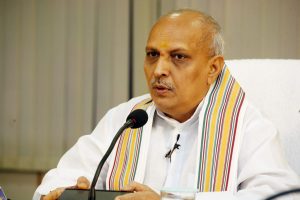