APPROVAL FOR A DOZEN PRODUCTS

NO MIDDLEMEN INTERVENTION IN THE SUPPLY

BUILDING A DISEASE FREE SOCIETY IS THE MOTTO-TTD EO

TIRUPATI, 02 JULY 2022: TTD has entered a pact along with Markfed and Rythu Sadhikara Samstha (RySS) on a dozen products produced out of Natural Farming methods for making Srivari Prasadams.

In this connection, TTD EO Sri AV Dharma Reddy has convened a review meeting with the officials of the twin departments at Sri Padmavathi Rest House in Tirupati on Saturday.

Speaking on the occasion the EO said, TTD is committed to prepare Srivari Prasadam with go-based organic products and hence made agreement in this direction in October last in the presence of the Honourable AP CM Sri YS Jaganmohan Reddy.

These products will be gathered through RySS and in turn TTD will buy from MARKFED which will cleanse the products bought from farmers associations without any role for brokers and middlemen in a transparent manner.

TTD EO said TTD has launched the prestigious program of promoting organic products without use of pesticides and chemicals and for the benefit of the society.

He appealed to the organic farmers selected by the AP farmers associations to desist from use of pesticides and save the society from health hazards.

The EO asserted TTD has set as a role model to other temples across the country in preparing organic Prasadams. He also said even the hotels and restaurants will also shift to organic products in near future which would result in building a disease free society.

The Vice-Chairman of RySS Sri Vijay Kumar said in the first phase 1300 metric tons of pulses were purchased from farmers and tested for chemicals residues. He said selection of organic farmers is underway for growing 12 organic products which will be promoted under supervision of the associations.

He said as part of TTD agenda of promoting organic farming last year 1800 cows were given away freely to organic farmers and steps were underway to give away large number of cows and bullocks from all Goshalas across the state.

The MARKFED and the state farmers associations will together strive to supply required quantity of 12 organic products to TTD this year, he added.

The MARKFED MD Sri Pradyumna said  last year as against TTD request for 1276 metric tonnes of dals and pulses, 500 metric tonnes were supplied by MARKFED by giving 10% above MSP to benefit farmers and qualitative Prasadam distribution by TTD.

He said MARKFED made payments to organic farmers within ten days and later got reimbursement from TTD and was confident that with Srivari blessings the camps for organic products will be a success. 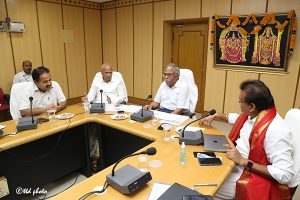 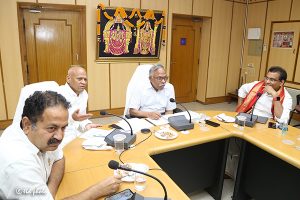 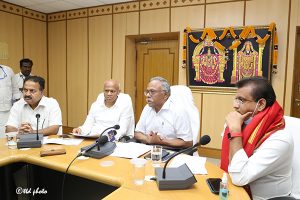 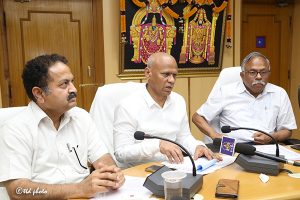