Tirumala, 14 Mar. 20: The pilgrims will be allowed for darshan by issuing Time slot tokens with out making them wait in Compartments from March 17 onwards as a preventive measure to check the spread of Corona Virus, said, TTD EO Sri Anil Kumar Singhal.

Addressing media persons at Annamaiah Bhavan in Tirumala on Saturday evening, the EO along with Additional EO Sri AV Dharma Reddy said that following call given by the State Government to initiate measures to check the prevalence of Corona Virus as Tirumala happens to be the most populated pilgrim centre with the highest congregation of pilgrims, we have contemplated some measures”, he added.

The devotees will not be made to sit in the compartments of Vaikuntham Queue Complex to avoid person to person contact. “In the given time slots, the pilgrims will be allowed for darshan by limiting the numbers. The devotees should bring any ID card viz. Adhaar, Voter, Driving Licence etc. along with them to get the Time Slot tokens for darshan”, he said.

Compartments will be set up in Tirumala and Tirupati to issue Time-slot tokens to devotees. The devotees have to co-operate with TTD, as they will have darshan only in the Time slots given to them. They will not be allowed for darshan if they fail to come on time.

In view of the State alert on Corona threat, the celestial wedding ceremony of Sri Sita Rama Kalyanam which will be usually observed at Vontimitta as a part of the annual brahmotsavams of Sri Kodanda Ramaswamy temple is cancelled this year.

Many states have already declared a ban on the public congregation in many places especially religious centres, gyms, pubs, theatres etc.to avoid the spread of Corona.

As nearly one lakhs devotees are expected to converge for the celestial Kalyanam on April 7 at Vontimitta and sit for nearly 6-7 hours, TTD has decided to cancel the mass fete keeping in view the health safety of devotees. However, the Kalyanam will be observed in the temple as usual on the same day”, he mentioned.

The Bhoomi Pooja for the construction of Sri Venkateswara Swamy temple at Mumbai, which is scheduled on April 5, is also postponed following Corona Virus threat.

Certain Arjitha Sevas including Visesha Puja, Sahasra Kalasabhishekam and Vasanthotsavam will remain cancelled to avoid congregation of pilgrims for long duration. If any devotee is cancelling these arjitha seva tickets, they will be allotted with VIP break darshan by the Additional EO upon their request.

Thermal Screening is arranged at Alipiri, Srivari mettu, VQC, KKC, Annaprasadam also where the congregation of pilgrims is more. The cottages and rest houses will be allotted to pilgrims only after thoroughly cleaning them with disinfectants. The Health Officer is also directed to deploy more number of sanitation workers at all the vital points. Each area will be allotted to a senior officer to monitor who will observe the sanitation and cleaning process round the clock and report the same to Additional EO at Tirumala”, he said.

Seeking the divine intervention to safeguard the humanity from the dreadful virus, TTD will be observing a three-day Maha Yagam, Sri Srinivasa Shantyotsava Sahita Dhanvantari Maha Yagam from March 19 to 21 under the guidance of the Chief Pontiff of Visakha Sarada Peetham, Sri Swarupanandendra Saraswathi Swamy and Mantralaya Raghavendra Mutt Seer Sri Subudendratheertha Swamy at Paruveta Mandapam in Tirumala.

The EO appealed to devotees via media, to co-operate with the amendments brought by TTD in view of the red alert sounded by Central and State governments over the spread of Corona Virus, keeping the health safety of pilgrims in to consideration. 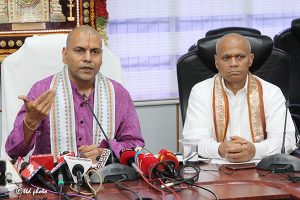 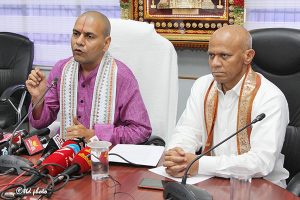