TIRUPATI, 03 SEPTEMBER 2022: As part of spreading the Hindu Santana Dharma in remote areas across the state of Andhra Pradesh and to avoid religious conversions in the backward areas, TTD along with Samarasata Seva Foundation will be constructing 111 temples with SRIVANI funds in the second phase, said TTD EO Sri AV Dharma Reddy.

A review meeting was held by the EO in his chambers in TTD Administrative Building in Tirupati on Saturday on SRIVANI Trust.

During the meeting, he directed the officials concerned to take up the construction of 111 temples across all 26 districts with a concrete action plan and complete it within a specified schedule. He said, TTD has decided to construct 1342 temples under SRIVANI Trust funds and in the first phase 502 temples were completed.

In the second phase, among the selected villages in SC, ST, BC and fishermen colonies, construction of temples is going to happen with Rs.10lakhs which includes 09 Srivari temples, 77 Sri Rama temples, 02 Hanuman temples, 03 Lord Shiva temples, 20 temples dedicated to Folk Goddesses.

Adding further he said, it has been decided to construct 1342 temples under the funds of SRIVANI Trust within two years and a review meeting on the progress of these works will be held once in every two months, he maintained.

He later directed the officials concerned to provide Puja materials to all these temples and give training to the Archakas who are going to be appointed in these temples in SVETA on Nitya Puja Vidhanam. JEOs Smt Sada Bhargavi, Sri Veerabrahmam, FACAO Sri Balaji, CE Sri Nageswara Rao, Sarmarasata Seva Foundation Chairman Sri Vishnu, Secretaries Sri Trinth, Sri Sunil and others were also present. 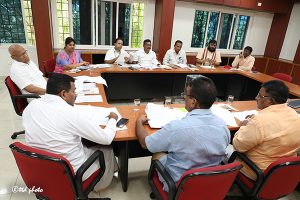 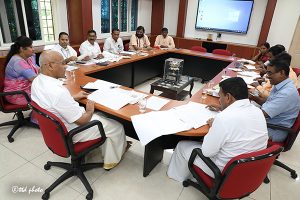 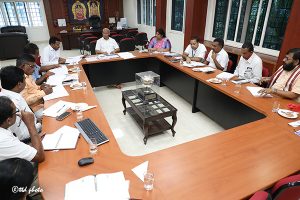