Tirumala, 11 August 2022: TTD EO Sri AV Dharma Reddy said on Thursday that with only 7000 rooms available at Tirumala, this would suffice the needs of only 35,000 devotees and accommodation stands as a perennial problem.

Addressing media persons at Annamaiah Bhavan on Thursday, the TTD EO said with over 1 lakh devotees daily turnout after Corona relaxation to Tirumala, the occupancy rate of rooms has registered an all-time high of 180%.

He said it has been an uphill task to provide rooms to all devotees coming to Tirumala as accommodation is going to be a major challenge as was in the past, in the present and even in future. Hence devotees should come to Tirumala for darshan as per their time slots. Both High court and State Governments have put a stay on new constructions in Tirumala.

The TTD EO said about 2000 rooms are made available for online reservation and another 15000 persons could be accommodated in the PACs. Even counters are opened for reservations in the virtual Queue line and as many as 4500 geysers are installed in Tirumala rooms.

The EO Sri AV Dharma Reddy said, it has been instructed that the Tri colour flag should be hoisted atop all the TTD – employees houses as part of Azadi ka Amrit Mahotsav on August 15.

He also said, TTD is contemplating a rally from the Administrative Building to Mahatma Gandhi Statue on the same day after Independence Day celebrations in the Parade Grounds of TTD. 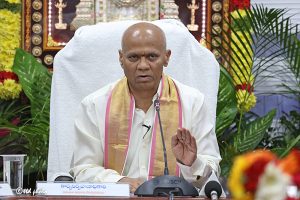