TIRUMALA, SEPTEMBER 29:  Sri Anantha Padmanabha Vratam has been observed with religious fervour in Tirumala on Saturday.
TTD usually observes this festival every year on the auspicious day of Bhadrapada Sukla Chaturdasi day. In a ceremonious procession the Chakrattalwar has been taken to Sri Varaha Swamy temple from Srivari temple by the temple priests amidst the chanting of Vedic Mantras at around 6am on Saturday.
Later Abhishekam and special pujas were performed to the Sudarshana Chakram and later holy bath has been delivered to the Chakrattalwar by immersing it in the holy waters of Swamy Pushkarini. After the rituals the Chakrattalwar was brought back to the Tirumala temple. Usually holy bath to Chakrattalwar will be performed on four occasions including Brahmotsavams, Mukkoti Dwadasi, Rath Sapthami and on Anantha Padmanabha Vratam by temple priests in a year.
At the holy feet of the presiding deity in Srivari temple, the temple priests performed Sri AnantaPadmanabha Vratam by reciting the Vrata Mahatyam. Later the holy threads of Vratam have been distributed to the archakas and temple officials.
TTD EO Sri L.V.Subrahmanyam participated in this auspicious vratam. Later talking to media persons he said, Hindu dharma says that one should perform this vratam continuously for 14 years for the well being. “So far our family has been performing this vratam from the past 12 years. I am thrilled a lot since this year we have performed this ritual this year in the abode of Lord Venkateswara”, he added.
TTD Officials were present.
ISSUED BY THE PUBLIC RELATIONS OFFICER, TTDs TIRUPATI 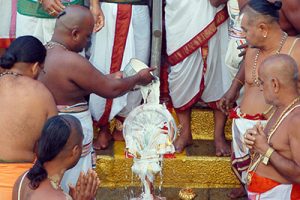 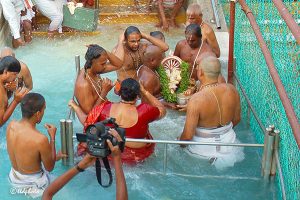