A review meeting with all the Heads of various departments in TTD was held at the Conference Hall in TTD Administrative Building in Tirupati on Friday by EO on the Amrit Mahotsav arrangements.

He said following the clarion call given by the Honourable Prime Minister of India Sri Narendra Modi to fly the Tricolour flag on every household on the auspicious occasion of the Platinum Jubilee of Independence Day celebrations, Azadi Ka Amrit Mahotsav will be observed in a grand manner by TTD in the Temple City.

As part of it, the EO said, every employee of TTD will fly the National flag upon his or her house and also take part in the rally which commences at the Administrative building and concludes at Mahati Auditorium.

He directed JEO (H & E) Smt Sada Bhargavi to circulate the guidelines given by the Central and State Governments to observe the National fete to every employee.

He also directed the CVSO Sri Narasimha Kishore to coordinate with the district police and ensure that there is no traffic hitch en route the massive rally. He instructed all the HoDs to ensure that every employee takes part in the rally with White uniform wearing the badge of the Tricolour flag.

The JEO informed the EO that 1000 students from all the TTD educational institutions have also been selected for the rally. “A few students will wear the guise of National leaders and lead the rally with relevant patriotic slogans”, she added.

An AV with the display of 75 Freedom Fighters was also being contemplated to be displayed during the “At Home” to be hosted by the EO in Tirupati on the evening of August 15. 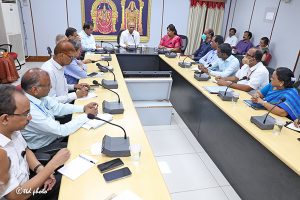 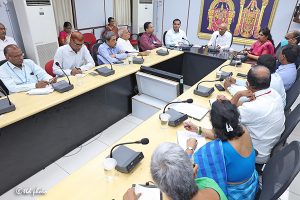