TIRUPATI, 28 DECEMBER 2022: After offering prayers at Alarmelu Mangapuram in Tiruchanoor, the Honourable Chief Justice of India Justice D.Y. Chandrachud along with the members of his family offered prayers in Srinivasa Mangapuram temple on Wednesday evening.

Earlier, on his arrival he was received by TTD Chairman Sri YV Subba Reddy and TTD EO (FAC) Sri Anil Kumar Singhal at the main entrance of the temple. Later he offered prayers to Dhwajasthambham had darshan of the presiding deity of Sri Kalyana Venkateswara Swamy.

After darshan, the temple Archakas rendered Vedaseervachanam and the Chief Justice of Apex Court was offered prasadams by the TTD Chairman and EO.

Later the CJI has also performed Gopuja to the cow and calf in the temple premises and fed the bovine with fodder. 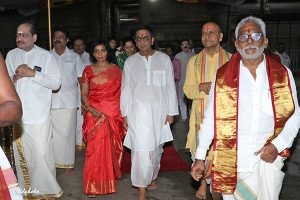 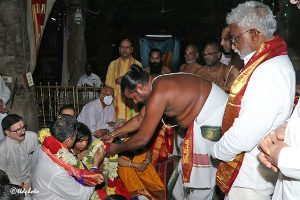 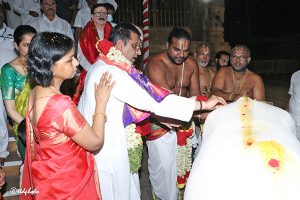