SECOND PHASE OF ‘MANAGUDI’ ON KARTIKA POURNAMI-TTD EO
TIRUMALA, SEP 07:  After receiving overwhelming response with the successful conduct of the “Shravana Pournami – Managudi” programme on August 2 with public participation across the state with the joint efforts of TTD and AP Endowments department, TTD is contemplating to organise the second phase of “Managudi” programme on the auspicious day of Kartika Pournami which falls on November 28 this year, said TTD EO Sri LV Subramanyam.
Addressing the viewer pilgrims during the monthly “Dial Your EO” programme which took place at Annamaiah Bhavan in Tirumala on Friday, the EO said, during the first phase the programme has been conducted over 14,731 temples across the state with public participation. “This time we will enhance the number”, he asserted.
Later answering a pilgrim caller Sri Rammohan from Anantapur he said, TTD has appointed special officers to improvise standard of education as well quality of food that is being served to the students studying in TTD-run institutions. He said since there is a problem in roaster points, fresh recruitment of faculty has not taken place in TTD-run educational institutions from the past 13 years. “This problem will be over come soon”, he maintained.
Taking the call of Sri Tulsiram from Bangalore the EO assured if the locals come out with a development plan of the ancient Mugalishwara temple located in Palamaner-Bangarupalem NH road, TTD will provide financial assistance to renovate the temple.
Answering the query of another pilgrim caller Sri Ramakrishna from Pune, the EO said that the defects in the recitation of Sahasranamarchana will be rectified soon after discussing with pundits.
Replying the queries of callers Sri Nagabhaskar of Rajamundry and Hariram Prasad of Kakinada, the EO said, Srivari Parakamani Seva is at present restricted to only Government(Either Central or State), Nationalised Scheduled Banks, LIC and PSU employees who are either in-service or retired only. In future it may be extended to other sectors also. He said the state government Endowments Department is also will to extend the service in all the temples which comes under 6A category in near future.
Later talking to media persons the EO said, the annual salakatla Brahmotsavams will be from September 18 to September 26. He appealed to the pilgrims to be cautious while bringing infants and children to Tirumala for the mega event as it is heavily crowded during that period. He said there will be ban on two-wheelers movement as in the case of previous brahmotsavams on Garuda Seva day. He said witnessing the grandeur of processional deities on various vahanams during brahmotsavams is considered to be equivalent to the darshan of presiding deity.
He said the Honourable President of India Sri Pranab Mukherjee will inaugurate “Nandakam” rest house on September 9 for the sake of the visiting pilgrims.
JEOs Sri KS Srinivasa Raju, Sri P Venkatrami Reddy, CVSO Sri GVG Ashok Kumar and other officials were also present.
ISSUED BY TTDs PUBLIC RELATIONS OFFICER, TIRUPATI 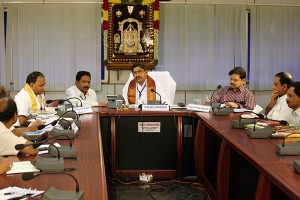 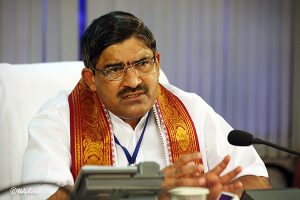 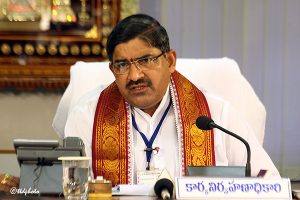