NO HARATIS ON GARUDA SEVA

Tirumala, 26 September 2022:  TTD CVSO Sri Narasimha Kishore said that all out efforts are being made for providing a pleasant and trouble-free Darshan and vahana sevas for devotees during the ensuing Srivari Brahmotsavams in Tirumala.

Addressing media on the eve of Srivari Brahmotsavam at Annamaiah Bhavan in Tirumala on Monday, the CVSO said TTD is operating a three-layer checking and frisking to ensure the safety and security of devotees from anti-socials and other possible threats.

First check is at the Alipiri checkpoint, later inside Srivari temple and thereafter at Mada streets.

Secondly TTD has installed 2200 CC cameras and another 1500 more are on the anvil in the third phase.

“We are planning to cover even the Ghat roads in a phased manner”.

He said about 5000 strong force including special squads against thefts, law and order, and a SPF contingent of 460 are being deployed in addition to the existing TTD vigilance for the Srivari Brahmotsavam. Especially for Garuda Seva an additional force of 1256 personnel are being deployed.

He said focus of the security forces is to reduce congestion and in that direction vehicles and men will be stopped at Alipiri itself, if the crowds at Tirumala cross the manageable limits.

The ongoing Puratasi month anticipated to bringing massive devotees from Tamilnadu is a challenge for TTD during Brahmotsavam.

He said the Mada streets galleries have a sitting capacity of 1.25 lakhs but almost 2.25 lakhs could be managed by moving crowds after darshsn from galleries by accommodating upto 10,000 at each of the gates. A chart of Do’s and Don’ts are being issued to all security personnel to follow and ensure devotee comforts and convenience.

Special arrangements are made for press, police and employees via Bedi Anjaneya temple through ES-7 and exit through ES-6 gates.

He said during Brahmotsavam special routes also have been earmarked for devotees to enter Sarva Darshan queues through VQC-1&2.

He said major hurdles and a eyesore for Tirumala is the menace of stranded chappals scattered all over in heaps.

Secondly he urged devotees to opt for steel or copper bottles instead of glass bottles in place of plastic bottles which are banned.

He said that to provide more darshan to a larger audience, TTD board has cancelled haratis on Garuda Seva day while on other days haratis will continue. 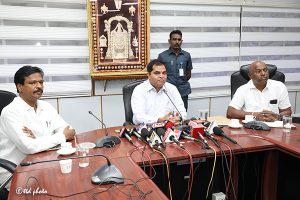 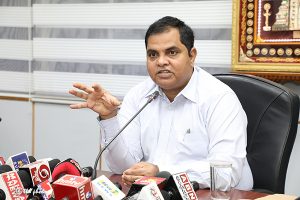