Y.Ramavaram (E.G.Dist), 15 April 2010:Sri I.Y.R.Krishna Rao, Executive Officer TTDs today said that three to four Lok Kalyana Rathams were being fabricated by the Ashok Leyland for purpose of use for the Hindu Dharma Prachara Campaign launched by the TTD.

Addressing a crowd of Khoya and Konda Kapu tribal’s crowds at the Y Ramavaram; the EO said the purpose of the Lok Kalyan Rath campaign was to ensure that the common devotees could have darshan and prasadam of Lord Venkateswara and his blessings where ever they were without the trouble of coming all the way to Tirumala.

He said all the daily rituals performed at the Srivari Temple in Tirumala were being performed for the period of seven days wherever the Lok Kalyana Rath was stationed in each of the three mandals of East Godavari District for the benefit of the tribals and common devotees.

Krishna Rio said however there will be no Hindi collection of donations from devotees or Aria seas at the Look Kalian Roth locations.  He said with the successful conduction of the East Godavari trip the TTD will take the Rath with modifications (Increased height of the deity of Lord Venkateswara to Six feet) will roll out all over the country in the next few months.

At the Govinda Kalyanam performed at Y Ramavaram tribal village, nearly 12   Tribal archakas who were trained at the SWETA training centre of TTD were also involved in the performance of the Kalyanam festival. Later on laddu prasadam and a booklet were also distributed free of cost to all devotees.

The Govinda Kalyanam was held at Y Ramvaram, a popular forest village known for  Khoya tribals who served  Lava Kusha of  Ramayana fame and also known for its links with  Saint writer-poet  Valmiki. It is also a major haven for medicinal plants.

As part of the program for Hindu Dharma Pracharam, the TTD had set up Ayurvedic and Allopathic medical cap besides led by medical officer Dr Koteswar Rao. Free medicine was given to tribals and also the SRAVANAM unit also gave treatment to tribal children who were hard of hearing.

The Lok Kalyana Ratham will stay put in each Mandal headquarters –Rajanagaram, Kothapeta and Kurokonda for seven days each Beginning April to the end of May wherein everyday spiritual and devotional programs will be performed to the Utsav idols which will be brought in a special vehicle from Tirupati.

A euphoric crowd of over 1000 tribal men and women participated in the Govinda Kalyam. They raised the slogan of Govinda, Govinda all through the ritual. Tribal women and men broke coconuts and performed prayers and Archana to the three feet high idol set in the  Lok Kalyana Ratham and were assisted by two archakas. 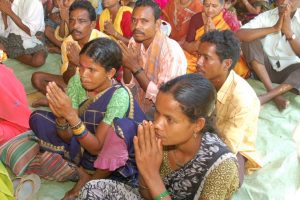 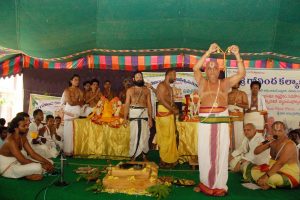 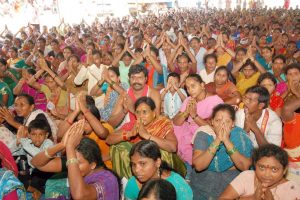 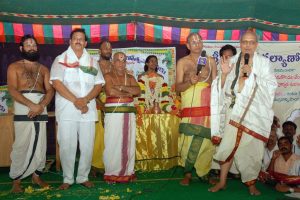 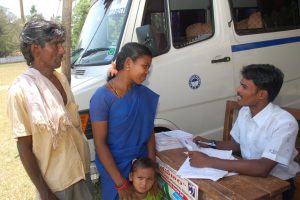 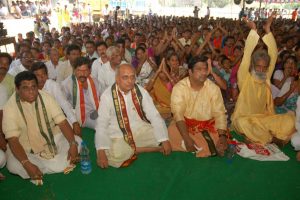