TIRUMALA, MAY 13:  This is more than a life time golden opportunity for the couple who enter the wed-lock in the sixth phase of Kalyanamastu which is slated to take place across the state on May 20, as the ornaments including talibotlu and mettelu which are offered to the bride by TTD have been sanctified on Friday as they were placed at the feet of the presiding deity of Lord Venkateswara for his divine blessings.

Earlier in the day, the TTD Executive Officer Sri IYR Krishna Rao carried the sare (talibotlu and mettelu) in a plate over his head in a traditional manner amidst the chanting of vedic hymns by temple priests from Bedi Anjaneyaswamy temple to Tirumala shrine where special puja has been performed inside sanctum sanctorum to the ornaments.

Later addressing media persons at Tirumala Asthana Mandapam, TTD EO said, ” The ornaments have been formally kept at the feet of Lord for his blessings and they will be distributed to the respective districts as per their requirement. So far 5500 couples have registered their names. We are confident that this number will cross 15thousand mark this time as we have few more days left for the free mass marriage to take place. However, we have decided 5pm of 18th May as the last date of registration process. If the number exceeds 20thousand mark, we cannot accommodate them in this phase of Kalyanamastu. So we put this time limit. But based on the final figures, we think of extending the date of registration even on 19th and 20th May morning before the wedding muhurat commences”, he added. 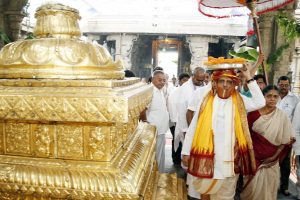 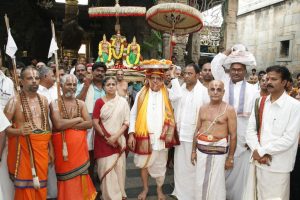 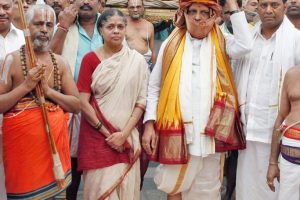 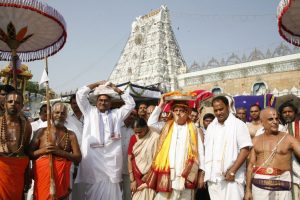 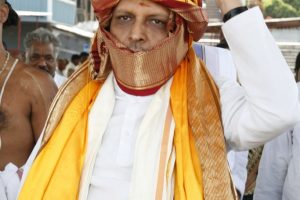 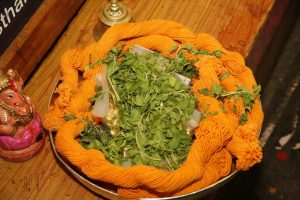