TIRUPATI, 03 DECEMBER 2022: The temple staff of Srinivasa Mangapuram have restored a cover having an amount of Rs. 44,613 lost by a devotee on Saturday.

Sri K Janardhan Setty, a pilgrim from Karnataka lost his cash cover. Vahanam Bearer Sri Muni Reddy identified the cover and handed over it to the temple staff.

Later the temple staff announced the same over the mike and restored it to the devotee who inturn thanked the sincerity and truthfulness of the temple staffs Sri Dhanasekhar and Jamedar Sri Chiranjeevulu and the Vahanam bearer. 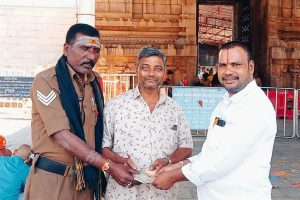