Tirumala, 20 Jan 2010: The TTD specified authority(SA) which held the meeting at Annamaiah Bhavan in Tirumala on Thursday under the chairmanship of Sri J.Satyanarayana and members, TTD Eo Sri IYR Krishna Rao and Sri V Nagi Reddy has discussed on 127 agenda items and taken some important decisions. The major ones are as follows:

TTD has decided to not to disturb the existing structure of Tirumala temple as resolved in the two day meeting held on “Perspectives of darshan in Tirumala temple” in Tirupati on November 20th and 21st last year.

The SA has constituted a six member committee to look into the suggestion and design of moving plat form.

Abiding to the High Court orders, the SA has closed the Ananda Nilayam Ananta Swarnamayam project. However the temple management has put forth some alternatives before the donors as so far TTD has procured 95kilos of gold and 12cr cash from the donors towards the project.

TTD will shortly issue a notice to all the donors who have donated towards the project to choose the following alternatives.

The donor can take back the gold or cash donation he or she made or if they are not willing to take back the amount, TTD will give them a list of jewels which they require to decorate the Lord and accordingly the jewel will be made as per the wish of the donor.

Otherwise the gold biscuits will be handed over to treasury of TTD which will be deposited in banks or the donor could transfer the cash donation which he has made to other schemes like Pranadanam or Annadanam etc. However the privileges of the donors will remain as usual.

TTD in a major move has decided to entertain certain privileges to those who donate Rs.1cr and more. Such donors along with five of their family members will be given free accommodation in Rs.2500 or above cottages for three days, VIP break darshan and Suprabhatam darshan each for three days in a year and also Veda Asirvachanam for a day. They will be given a gold dollar, silver dollar, Mahaprasadam packets, 10 big laddus also. This facility will be extended for life time in the case of individuals and for 20 years in the case of firms.

If any donor donates Rs.1cr or above to SV Veda Parirakshana Trust, they will be given an additional privilege of performing Sarva Kama Prada Lakshmi Srinivasa Maha Yagam in Srinivasa Mangapuram in Tirupati.

TTD has in principal accepted to provide required support to railway board which is planning to make Tirupati railway station to international standards provided if the railway board give a detailed project report to TTD.

TTD has allotted an estimated budget of Rs.10cr to construct a Venkateswara Swamy temple in the five acres of land donated by Vivekananda Trust in Kanyakumari.

The SA has also given green signal towards the beautification of Narayanagiri Gardens at an estimated cost of Rs.4cr, Kalyana Mandapam in Sampangi Prakaram at Rs.1.5cr, renovation of Sapthagiri cottages blocks 2 and 3 at Rs.5.9cr, air conditioning of all the seven compartments in VQC II, gold malam works of Swarna ratham (golden Chariot) at an estimated cost of Rs.3.5cr

In yet another major move, TTD SA has decided to bring all the vedic institutions in the state of Andhra Pradesh under one umbrella by designing common standards of admission, education and examination rules.

To avoid congestion near Vendi Vakili inside the sanctum TTD SA has decided to run bifurcated lines alone.

TTD has also decided to take up the revival of the 2nd century BC Lord Shiva Temple at Gudi Mallam and increased the honorarium by 25% to Jiyangar Mutt.

The board resolutions starting from 1990 will be displayed on TTD web for the sake of general public.

The SA has also decided to give six days training in Dharma Prachara to rural youth and also decided to make Prasadams of Lord with Desi cows alone. Separate testing equipment to check the standards of laddu ingredients like Dal flour, Ghee and Sugar will be soon installed to enhance the quality of Laddu prasadams. 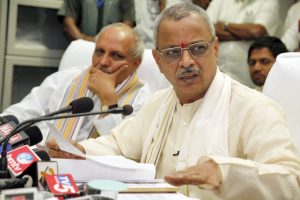 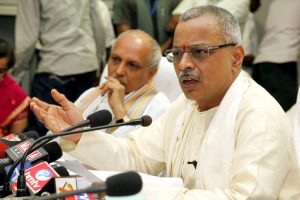 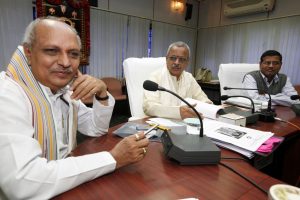 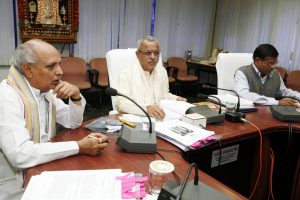