Dharmagiri, Tirumala, September 24: Young lads with closely shaved heads with Vedic chants on their lips are a rarity. But there were  650 of them in the Veda Vijnana  Peetham, in the sylvan surroundings of  Dharmagiri, about five km east of from the Srivari Temple at Tirumala.

From morning to night for eight to  12 years they strive their best to get the correct pronunciation and proficiency in  Vedas to become eligible for temple jobs in conducting Veda parayanas and also rigid rituals and practices as per the Agama and Vaishankhayana and Saivite customs.

Catch them young is the adage to prepare purohit, archakas and Veda  Parayana specialists. “ We select students from the tender age of    10  to 12 years  (the equivalent of   Fifth to Seventh Std’s) so that they could be trained and also moulded in the best practices of Agamas for posterity “.

G K Ramamurthy, the principal ( Pradanacharya )of the Peetham says  Vedas and rituals are not for proficiency in pronunciation and memory but also for enhancing moral values and social practices in society.

Ramamurthy said the  Sri Venkateswara 125-year-old Veda Patasala was had trained over 2000 archakas and Veda exponents. Presently four courses were taught. Veda Parayana, Divya Prabhanda, Archakatvam and Purohitvam.While the Veda parayana is a 12-year course,  the remaining eight are for eight years.

This is a totally sponsored education as the TTD provides a stipend of Rs. One lakh per annum for the student’s education and also provided funds for their hostel and boarding.

“ We select students from aspiring students after a rigid  entry test “ says Mallikarjuna Avadhani ., vice principal of the patashala.

The pathashala is spread over   24 acres of sylvan surroundings with a   rich faculty of 50  pundits in  21  departments. “ We aim to introduce  seven new courses  like  Krishna Yajurveda( maitrayanam), Sama Veda ( Ramayaneeya , Jaimainiya ) Sroutam , Vaidikagamamam “ says   Avadhani.

A three-level examination system held in  8-  10 sessions finally eliminates weaklings and produces hard-core Veda exponents fit for any jobs either as researchers and also archakas in numerous temples spread across the country and abroad.

Avadhani says non-brahmins were also encouraged to take a special course designed for them  Chattada Srivaishnavagtamam to prepare them as priests in various temples and religious institutions spread across the country.

Principal Ramamurthy says that most of the graduates from the patashala have already been absorbed in the service of  TTD  temples and its teaching institutions.  “ We do not keep our students engaged in just   Vedas and rituals. We also teach them on use of computer for their day to day livelihood and activity “ he says. A four-month course in computer operations is taught to all students with help of personal computers donated by some software companies along with tutors.

“We are one of the best Veda schools in the country where the courses are both for practice, for livelihood and also research, “he says. Most of the students of the Pathashala have become tutors there itself and also joined the Vedic University set up by the  TTD. 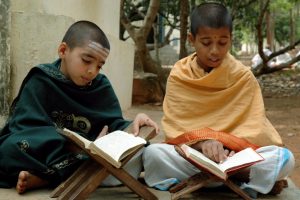