Tirupati, Aug 12, 2009: The 5th phase Kalyanamasthu programme on October 28, 2009 should be conducted with the cooperation of the District Administration told Sri I.Y.R.Krishna Rao, Executive Officer, TTDs. On Wednesday morning he has reviewed the arrangements for the smooth conduct of the mass marriages.

While speaking, he said that the District Collector would be the Chairman for the conduct of Kalyanamasthu and he directed the Secretary Dharma Prachara Parishad to identify the senior officers of TTD as Secretaries at District Level. There will be three liaison Officers for three regions in the state who will manage, motivate and monitor the campaign and actual conduct of the mass marriages in the District who assist the OSD Kalyanamasthu. He directed Sri A.V.Dharma Reddy, Spl Officer, TTDs, Sri P.V.S.Ramakrishna, Chief Vigilance and Security Officer and Dr. N.Yuvaraj, Joint Executive Officer to liaison in Rayalaseema, Prakasam, Nellore, coastal and Telangana Districts respectively. Extensive publicity through electronic and print media with the assistance of District Public Relations Officers he added. Awareness programmes will be arranged at all the District Head Quarters duly involving people representatives, Officers etc,. A tele/Video conference may be organised by the Hon’ble Chief Minister/ Endowment Minister to motivate the Public and to involve and enthuse the administrative machinery. 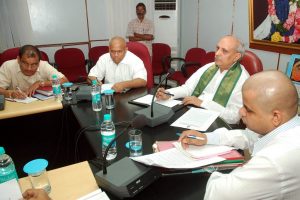