The Pallava-era temple (late 8th century) is among the 108 Sri Vaishnava holy shrines called ‘Divyadesams’, where the presiding deity is worshipped as Bhaktavatsala Perumal and His Goddess as ‘Ennai Petra Thayar’. The shrine is located on the Tirupati-Chennai route.

TTD Additional Executive Officer AV Dharma Reddy carried the silk clothing on his head and presented it to the priests. 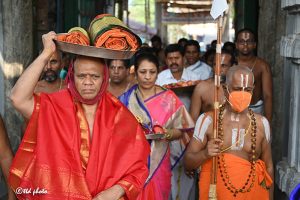