Tirupati, 4 October 2010: The TTD henceforth plans to reduce the VIP break period from One hour to thirty minutes each instead of One hour each both during morning and evening immediately and thereby increase the duration for darshan for common devotees.

Other decisions of the SA meeting are as below.

1.     The Sri-Seva concept of providing single window service to devotees at one counter to be studied for two months. Later an implementation agency will be selected through open tenders to introduce the services for a period of one year. Under the concept a single ticket will be issued for darshan, accommodation, tonsuring and also other services at Tirumala.

2.     All the lacunae and lapses in the computer network od of TTD to be net reorganized with new design, configurations and system up-gradation.

3.     Financial powers of the Executive Officer including engineering works enhanced up to a ceiling of  Rs. One crore.

5.     The TTD to ensure action on the Vigilance report on malpractices in Seva services after the state Government directions.

6.     New year diaries and calendars or 2011 to be prepared and distributed in October itself instead of December end.

7.      A seminar on  Darshan and services of TTD to be held at Tirupati in the month of November 2010 to rejuvenate the service orientation of the temple administration.

8.     TTD to appoint scholars and intellectuals to head its series of projects t as consultants on a contract basis. The modalities and terms are to be finalized by the Executive Officer soon either to appoint them on a) honorarium up to Rs.25,000 with perks or b) with  Perks and other incentives.

10.   TTD contribute a sum of Rs. 8.2 lakhs for the conduct of Yajnam at the Vaishnodevi temple in Jammu & Kashmir state being performed by the Kanchi peetham.

11.  The vacancy for a Medical officer in the S V Ayurvedic  Hospital to be filled up.

12.  The number of tickets for Abhishekam / Vastram sevas is held on every Friday to be limited to a maximum of 35  tickets only. 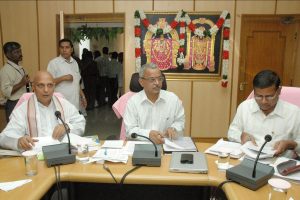 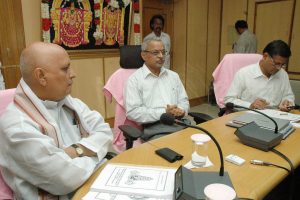