Spl story on Waste management and Sanitation at Tirumala

Tirumala   10 October 2010: Seven hundred and fifty permanent employees and over  1000 Contract workers and an additional workforce of  365  health workers are toiling day and night to keep the precincts around Srivari Temple and the Tirumala hill shrine spotless and hygienic, said Dr, S.V Vijayalakshmi, health officer of  Tirumala.

It is a great challenge to tackle the garbage created by nearly 50,000 to one lakh persons of all hues with different food and cultural habits. TheTirumala generated around 45 to 50 tones of garbage including organic and bio-diversity waste in a radius of three kms in Tirumala, she said. “ We have roped in  581 srivari Seva volunteers in the task of keeping the hill shrine clean and hygienic, she said.

We have over 1000 garbage litter boxes and many specifically for plastic and organic waste collection. The cottages and guest houses are maintained by our sourced contract workers of  Facility management while the roads, holy Mada streets and the temple premises were managed by the permanent employees she said.

Addressing reporters at the Media centre as part of the Navaratri Brahmotsavams, Dr Vijayalakshmi said that fact that people prefer to sleep on the floor at Mada street galleries and in front grounds of  Srivari Temple  spick and span displayed a high level of hygiene and sanitation maintained by the TTD administration at Tirumala.

We almost double the facilities during the Brashmotsavam period “said the health officer. The health officer says that after the Brahmotsavam the TTD will launch a special drive against plastic bags and bottles from the checkpoints at Alipiri.

TTD is also planning a human garland at Tirumala involving devotees, staff and others to focus attention on the need to contain food wastes which form the basic threat to the environment and ecology of Tirumala ‘ she said. The TTD will also campaign against plastic bags for laddu prasadam and has sought experts opinion on the use of jute and paper bags.

The health official said the TTD also launched a special drive against stray animals including monkeys, dogs and cattle at Tirumala. “ We have also rounded up 157 beggars and sent them to the beggar home, “ she said. 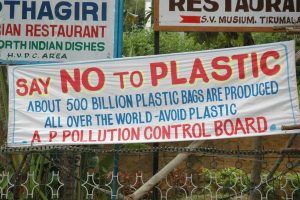 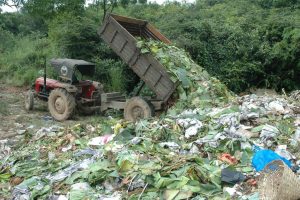 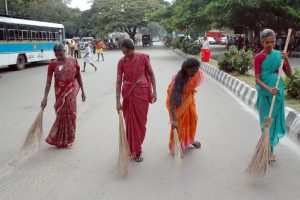