Tirumala, 11 OCTOBER 2010:The Mada streets on the four sides of the Srivari temple at Tirumala has become bee hive of activity during the nine-day festival of Brahmotsavam.

Pius devotees call it  ‘Thiru Mada Veedhi”. They even kiss the ground and wear its dust on their forehead. The Lord Venkateswara has been walking on these paths since several centuries,” they said with all reverence.

What was a sore sight behind the sacred Srivari temple a decade ago comprising of dilapidated buildings, unkempt streets, dangerously hanging electrifications and poor sanitation spots has now become a major attraction of devotees from across the country.

“The holy Mada streets showcase not only the beauty of the Tirumala valley but also is a pride of locations of TTD ’, says Sri I Y R Krishna Rao, executive officer of the TTD.

With the sacred  Srivari Temple in the background, the holy streets stretching into a  square pavilion with galleries on all four sides present a Gallic view of the ancient open-air stadium of sorts.
During the mid-noon and late evenings, devotees sit on the galleries when the Lord Venkateswara in various avatars gave darshan to them riding different vahanams and with all of his entourages. If his celestial entourage comprised of the army of Viswak Senadhipati today it comprised with bhajan singers, folk artists and costume-rich artists who aim to enthral the audience.

The Mada streets are the locations for Lord’s processions throughout the year and particularly on major festivals including the nine-day Brahmotsavam festival.

Various mathas of Swamiji’s, besides the Sri Varahaswamy Temple, Temple of Lakshminrasimhaswamy, Prasanna Anjaneya  Pushkarani, Laddu seale centre, huge garden with Srivari emblems of  Shanku, Chakra and Namam adorn the space at the  Mada street square.  With the huge granite walls of  Sampangi Prakasam of the Srivari  Temple in the background and the colourful illumination of all arches, Mada street appeared like a  massive showcase of  Indian spiritualism.

The Mada streets occupy a unique place in the history of Srivari Temple. Now brightly lighted and spotlessly clean the streets are out of bounds for all vehicular traffic.  ‘We have also banned wearing footwear on the  Mada streets as they are sacred and only eligible for Lord Venkateswara’s entourage and caravan “ says  Sri  Rao.

The Mada streets become the home for ardent devotees of Lord Venkateswara. At night after the  Vahanam procession, many of them sleep on the granite steps itself.  In the morning they partake bath at the adjacent Puskarani and go for darshan into Srivari Temple, . They wait for another vahanam in the morning and night.  “ More or less the Mada streets with lighting, drinking water facility and also mobile toilets and bathrooms, have become the nerve centre of  Tirumala next to only the Srivari temple, “ says  Sri Sundara Vadana Bhattacharya, the agama advisor to TTD.

Most of the devotees from lower-income groups bring their own food bags from home and spent the entire week in the lord’s praise. Throughout the day and night, devotional music blared from high-pitched audio speakers and huge plasma televisions are placed at all four corners of the gallery to benefit the devotees with the live coverage of the Sri Venkateswara Bhakti Channel (SVBC). Sometimes even epic serials are also telecast.

The entire Mada Street has a cement floor with permanent arches and also extended railings and lighting arrangements. With CC cameras all around the vigilant patrolling and monitoring of the Mada streets is the biggest open-air platform in the entire world. ‘The sun and rains do not bother the devotees who take shelter in nearby shades. But the picturesque valley is cool throughout the year ‘says Temple DEO Gopalakrishna.

“It has a capacity to hold two lakh devotees and could spill over to at least three lakns “say the temple offiocials for whom the mada streets is a pride possession. It is built with exit and entry gates from all four sides to facilitate the entry of devotees and avoid stampedes.

Besides the holy mada street and the Srivari Temple and the Pushkarani, the massive ground in front of the main temple is yet another place of attraction for devotees. The size of a huge football ground.  It facilitated crowds to relax in front of the temple as they witnessed the programs at the Nada Niranjanam stage to the left-hand corner of the temple or even participated in the Unjal Seva ( swing Seva) and the brahmotsavam  Vahanams.

The TTD administration is scouting ways and means to heighten the spiritual experience of Tirumala with programs around Four Mada streets.  ‘We aim to give the devotees, the best of services and also ambience for his time and spiritual concentration “says Sri I Y R Krishna Rao.

Four  Mada streets thus showcase not only the spiritual leadership of  TTD  but also its pioneering movement to spread awareness of  Hindu dharma and bridge the social, cultural activities with religion and spiritualism. 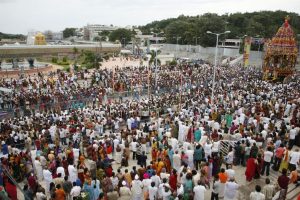 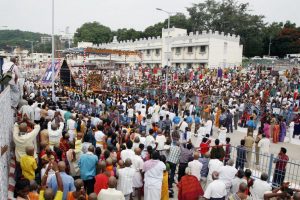