TIRUPATI, 07 JUNE 2022: As the Maha Samprokshanam fete of the newly built Sri Venkateswara temple at Venkataplaem in Tullur Mandal at Amaravati is scheduled on June 9 in the auspicious Mithuna Lagnam between 7:50am and 8:10am, TTD is gearing up for the mega religious event which will be attended by Honourable Governor, the CM of AP, TTD Chairman and graced by the Pontiff of Visakha Sarada Peetham.

Later Veda sattumora, Akshataropanam, Harati, Acharya Bahumanam and Dwajarohanam will be observed. Later the devotees will be allowed for Sarva Darshan of the presiding deity from 10:30am onwards.

In the evening between 3pm and 4:30pm the celestial wedding Srinivasa Kalyanam will be performed. This will be followed by the procession of utsava idols, Dwajavarohanam. In the evening, after Nitya Kaikaryams, the Ekantha Seva will be observed at 9pm.

ARRANGEMENTS: TTD has deputed 400 personnel from various departments to look after the arrangements of Maha Samprokshanam and Vigraha Pratista at SV temple.

The Engineering Wing has made elaborate arrangements including stage setup, barricading etc. for the smooth conduct of the event. The other arrangements included 40 mobile toilets, welcome arches at three different places, 50 flexes in vital points, and counters for the display and sale of TTD products.

The Electrical wing of TTD has made special illumination arrangements to enhance the beauty of the temple and its surroundings. Shanku Chakra Tirunamam are arranged with LED lights while special light arrangements are being made to the Gopuram, Vimanama and Alaya Prakaram. Special light decorations have also been made to the stage set up to perform devotional cultural programmes.

To carry out all the religious events as per tenets of Vaikhanasa Agama, TTD has also deputed a team of Acharyas which included one of the Chief Priests of Tirumala temple and also Agama Advisor.

Apart from the regular staff, TTD has also invited Srivari Seva Volunteers from the surrounding places to offer services to the visiting devotees. To render devotional songs, Bhajan Mandalis have also been invited. About 2000 volunteers and bhajan artists will be taking part in the event.

The Maha Samprokshanam of the Sri Venkateswara temple will be telecasted live on SVBC on June 9 for the sake of global devotees by TTD. 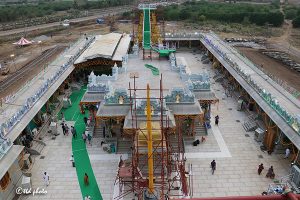 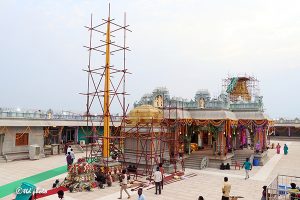 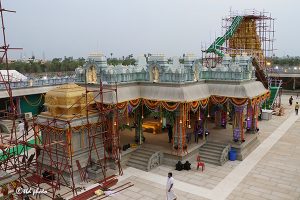