TIRUPATI, DECEMBER 16:  The “Triyoga” style presented by internationally renowned Yoga Maestro, Swamini Kaliji has casted its magic in the temple city of Tirupati as thousands of Yoga-lovers are mused by the extraordinary performance.

The Education wing of the temple administration of Tirumala Tirupati Devasthanams(TTD) along with SV Yoga Kendra organised Triyoga, for the first time in Tirupati on Thursday. Addressing the inaugural session, Swamini Kaliji said, the concept of Triyoga manifest on all levels including physical, mental and spiritual. She said, the effects of performing this yoga will improve health, increase life energy, mental clarity, intuitive knowledge and offer blissful happiness. “The practice of Triyoga culminates in higher levels of awareness”, she added.

The renowned Yoga master said that Triyoga broadly means the realisation of Sat-Chit-Ananda(Sachidananda) which means Consciousness, Knowledge and Bliss-the universal trinity.  She said, Triyoga unites pranayama and mudra with dynamic and sustained Asana and the flow of energy is characterised by rhythmic pacing, relaxation in action, wake-like spine movements and economy of motion.

Addressing the occasion, TTD Educational Officer Sri Vidyaranya Swami said Swamini who founded Triyoga style aims at awakening the spontaneous flow of Prana(Life-Force) by joining postures, breath and with a series of energy-driven hand mudras. “TriYoga is complete method of yoga that includes the full spectrum of traditional yogic practice”, he added.

Later TTD PRO Sri T.Ravi in his address said, Baba Ramdev is a renowned figure in the country for Yoga. But with a noble intention to introduce a renowned person like Swamini, the TTD EO Sri IYR Krishna Rao has directed the officials to arrange this programme so that the denizens of Tirupati will become aware of Triyoga style also. He said Swamini has devoted her life to universal teachings of Triyoga and so far she has presented over 33 key note addresses in 31 countries across the world. Kaliji’s presence, her mastery of flow, and the ageless wisdom inherent in TriYoga have inspired and transformed countless lives across the globe. He said, being a disciple of Sri Mata Jaya Lakshmi and his holiness Sri Sri Ganapathi Sachidananda Swamy, Kaliji received the title of “Vishwa Bandhu” in recognition of her invaluable service in the field of Yoga across the universe. Apart from this, she was also honoured as one of the most inspirational women among the top 208 list in the prestigeous National portrait Gallery at London in England.

Later swamini performed Yoga Asanas and Yoga Hatha Mudras including Mayurasan, Sarvangasan, Chakrasan etc with much ease with out interruption for 15minutes and enthralled the specatators. 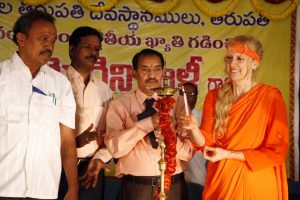 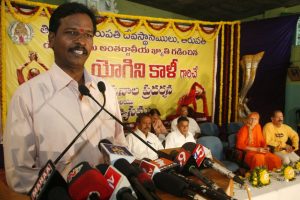 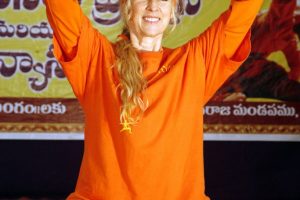 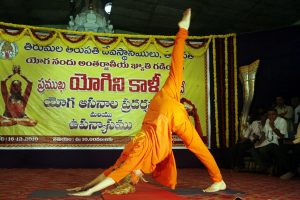 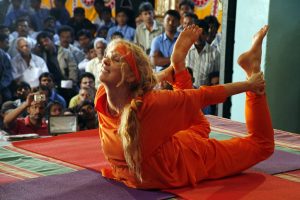 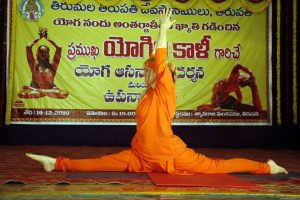 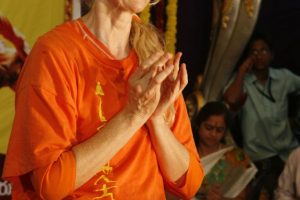