TIRUPATI, NOV 15:  The two-day conference on the “Perspective of
Darshan at Tirumala Temple” to be convened by TTD on November 20 and 21 is aimed at providing better darshan to pilgrims, said TTD EO Sri IYR
Krishna Rao.

Elaborating the motto of the conference during a media brief at Sri Padmavathi Guest House in Tirupati on Monday, he said since TTD is
aiming at brining a paradigm shift in the darshan system for the sake of the pilgrims, we welcome all sections of people to take part in this meet and express their ideas apart from the intellectual fraternity”, he added.

“In the noon session there will be a paper presentation on “Moving
Platform” (inside the temple) followed by presentation of papers by
media heads. The day one meet will conclude with “Tirumala Vaibhavam”
dance ballet by SV Music and Dance college students”, EO said.
Further elaborating the scheduled programme, the EO Mr.Rao said, the
second day will commence with the presentation of papers on Agamas
with reference to facilitating better darshan etc. by former TTD EO
and retired IAS, Sri PVRK Prasad, chief priest of the temple Sri AV
Ramana Dikshitulu, Agama advisors, Sri Sundara Vadana Bhattacharyulu,
Sri Vishnu Bhattacharyulu and Sri Appikatla Jagannadhacharyulu while
in the noon the key note address will be delivered by senior IAS
officer and former TTD EO, Sri I V Subba Rao and the closing ceremony
will be presided over by the TTD specified authority chairman Sri J
Satyanarayana”, Mr.Rao said.

Giving a clear statistical data about the existing darshan system in
Tirumala temple, the EO, Sri Rao said, the average annual pilgrim
turnout to Tirumala temple as per current statistical figures stands
at 2.5crores with roughly 20lakhs pilgrims having their darshan during
every month. “We have noticed that the pilgrim crowd is maximum during
the months of April and May”, he added.

The EO said, “Of the total annual pilgrim influx, about one crore
are Sarva Darshan pilgrims, 49lakhs are pedestrian pilgrims and these
two categories alone constitute 60% of the total pigrim crowd
earmarked in a year. While the rest includes, Rs.50 sudarshan token
pilgrims who are to the tune of nearly 41lakhs with 16%, 33.7lakhs
Pratyeka Pravesha Darshan pilgrims constituting about 13%,
7.5lakhs-Physically handicapped, 4lakhs-parents with infants,
7lakhs-seva pilgrims who all together constitute over 8%, while
6.9lakhs are VIPs comprising 2.7%”.

Mr.Rao said, in a day, on an average, the temple management has
allotted about 19h15min for the darshan for pilgrims while 3h13min has
been allotted for performing rituals and the remaining 1h32minutes is
the resting time for Lord Venkateswara.

The EO further said, “The year 2009 has recorded both highest and
lowest turnout of pilgrims in the temple history with the highest
number of pilgrim turnout who had darshan being recorded as 1.12lakhs
on October 4 while the lowest number being 45,500 which is recorded on
December 15. But the average pilgrim crowd is being recorded as
60-70thousands which lasts for nearly 143 days in a year”.

Mr.Rao said the TTD will also welcome the suggestions and advices by
pilgrims across the country in the form of letters and e-mails keeping
in view the time constraint in the two-day conference.
Joint EO(Tirumala) Sri J.Bhaskar and other officials were also
present at the press conference. 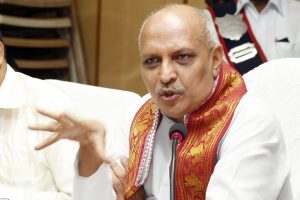 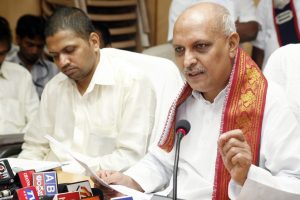