TO BE COMPLETED IN ANOTHER SIX MONTHS

Rs.130CR TOWARDS THE RENOVATION OF ANCIENT 150 HISTORICAL TEMPLES

TIRUMALA,  23 JANUARY 2023:  Sri Venkateswara Alaya Nirmana Trust(SRIVANI) was commenced by TTD in 2019 with an aim to construct small temples in SC, ST, BC, fishermen colonies and also to renovate the ancient temples as a part of TTD’s mission of taking forward Hindu Sanatana Dharma in a big way, said TTD EO Sri AV Dharma Reddy.

During a media conference arranged at Annamaiah Bhavan in Tirumala, the EO elaborated on various issues which were misinterpreted on various social media platforms and by a section of media misleading the devotees.

Condemning the allegations that SRIVANI Trusts are diverted to pay the salaries of TTD employees and also to state government programmes, he said, the funds from SRIVANI Trust are totally utilized in constructing temples in backward areas and in renovating the age-old temples across the state.

Giving the statistics he said, at present 2068 temples are under construction in different stages which also includes temples in the states of Telangana, Karnataka and Pondicherry. In a phased manner we will extend the construction activity to other states also in future”, he maintained.

Elaborating further he said, among these temples, 320 are being constructed with the co-operation of Samarasata Seva Foundation (SSF) at a cost of Rs.32 crore while the construction of another 932 temples will be taken up with AP Endowments department at Rs.100 crore approximately.

“Besides, we have received another 667 applications which will be scrutinised and construction will be taken up accordingly. Apart from these temples, another 150 ancient temples are under innovation at a cost of Rs.130 crore.

The EO also said, for Dhoopa-Deepa-Naivedyam activities in these temples, TTD has released Rs. 12.50 crore. A local committee was also formed to look after the affairs of these temples and every month, the amount will be sent to the Committee’s account. We also have a separate Account for SRIVANI Trust and Social Audit as well”, he maintained. 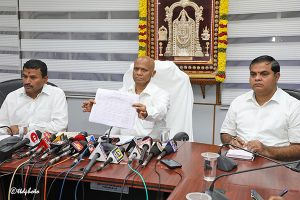 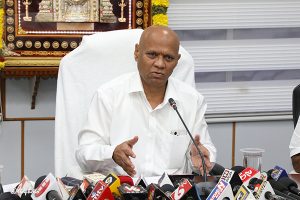