Tirumala,10 November 2022: TTD on Thursday categorically clarified that there is complete transparency in the production of Srivari Laddus and devotees shall not doubt about the quality and quantity of laddus prasadams.

After being prepared in Srivari Potu (Temple kitchen) the potu workers load them in a tray which is weighed by TTD officials everyday before it is being dispatched to laddu sale counters.

TTD stated that each laddu weighs between 160-180 grams. The difference of minus 70grams is only because of the technical problem that occurred in laddu weighing machine and lack of knowledge on the same by contract workers the devotees were put jn confusion over the weight of laddu.

Tirumala laddu never weighs less than 160grams. TTD had been following the same Dittam from the past several years and the Potu workers who have been preparing laddus all these years never compromised on quality or quantity of laddus.

TTD has appealed to devotees not to believe in such rumours and also sought devotees to inform the concerned officials at laddu counters of any lapses to resolve the issues immediately.

But the fact that the concerned devotees had instead chosen to upload the issue on social media is rather unsavoury,  damaging the reputation of the religious institution, hurting the sentiments of millions of devotees.

Hence TTD reiterated to devotees not to believe in the social media reports on baseless allegations about quality and quantity of Srivari laddu which is trusted by millions of devotees across the world. 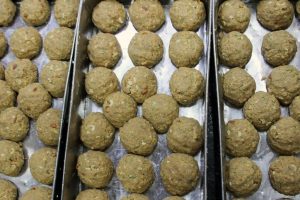