Tirumala, 5 December 2022: One of the significant festivals that is being observed in the auspicious month of Karthika at Tirumala is the Chakra Theertha Mukkoti which was observed with utmost religious fervour on Monday.

The sacred Chakratheertham is located, a few miles away in the southern direction of Srivari Temple in the green belt of the Seshachala.

As per the tamil Karthika masam, on the suddha dwadasi day, the chakra theertham mukkoti event is celebrated every year.

After the morning rituals the priests and other temple staff reached Chakratheertham to the accompaniment of holy drums and traditional music.

They performed abhisekham, flower decorations and aradhana to the Sri Sudarshana Chakrathalvar-the anthropomorphic form of Srivaru, Sri Narasimha Swami and Sri Anjaneya Swami idols located at the Chakra Theertham and later returned to the temple after the distribution of prasadams to devotees.

Legends speak, a devotee who was meditating for 12 years at Chakra Theertham when attacked by a demon was protected by none other than the Lord Himself who sent His Chakrayudham and killed the demon. Later the Lord left His most powerful serrated disc at the same location to guard the righteous people upon the request of the devotee and hence the torrent is named as Chakra theertham.

According to Varaha Puranam Chakra Theertham is considered as one of the most prominent one among the seven chief “Muktiprada” theerthams in the Sheshachala ranges. 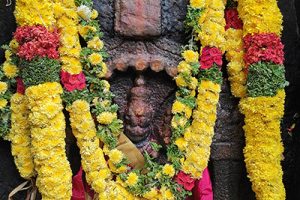 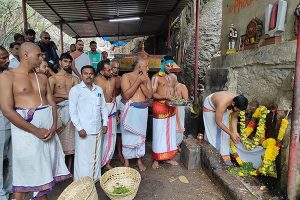 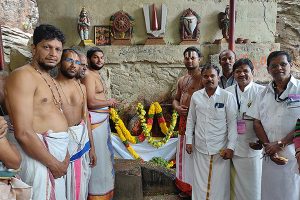