EO satisfied over the successful conduction of recruitment tests at Tirupati 

Tirupati, September  26 2010: TTD  Executive Officer Sri I Y  R Krishna Rao today expressed satisfaction over the successful conduction of the recruitment tests for candidates who had applied for posts of Junior assistants and others in the temple administration.

He said the key for the answers of the written test would be placed on the TTD website –www.tirumala.org  tomorrow and the results were expected to be announced by  October  2nd.

Sri Rao paid all kudos to Sri  N Yuvaraj, the JEO of TTD, Tirupati for the successful and fool proof conduction of the written examinations and also thanked the district administration, RTC and the Police for providing all coordination in security, transport and supervision.

The PRO unit of the TTD had also set up two ‘May I Help You” counters at the Railway station and the Bus stand to guide the nearly one lakh candidates who came from all over the country to their exam centres. The TTD had also provided free accommodation to candidates at  Nine temple dormitories and choultries and also reserved the Srinivasam guest house and others for providing paid accommodation to them.

The EO said the TTD had spent above Rs. Two crores for the conduction of the tests and had collected  Rs. 1.3 crore in the form of challan payments from the applicants for 86 jobs in the temple administration. The TTD had conducted the tests in coordination with experts of the  Chennai and Bangalore-based IIM and . IIT. 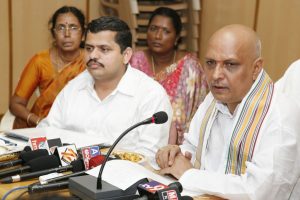