Tirumala, September 24: The ambitious program of the Tirumala Tirupati Dewasthanam’s to gold plate the entire sanctorum of Srivari Temple at Tirumala has received spontaneous response during the Srivari Brahmotsavam-2009. On the first day itself  two  kgs of gold donations were committed to the  Ananda Nilaya Anant Swaramaya  pathakam  .

Gold offering in kgs and also grams are pouring in from industrialists, businessmen all over the country and overseas and smaller devotees are also putting more and more gold chains, gold biscuits and rings in Hundis with specific mention that it should be used for the gold plating of Sri Venkateswara’s sanctum sanctorum.

“The response is overwhelming,“ says the TTD executive officer  I Y Krishna Rao .The chief minister  K Rosaiah  received the first  donations of gold in cash and kind  from the daughter of  TTD chairman , D K Adikeshavulu Naidu . Former CM Y S Rajasekhar Reddy  had  launched the first phase of the scheme estimated to cost Rs.150  crore during his visit to Tirumala for the state offering of  ‘Pattu Vastram’ to the deity  last year .

Last year within one week  of Brahmotsavam  25 kgs of gold were committed .

TTD authorities  who have so far collected   78 kgs of gold during the year  have already begun the works  and hope to complete within  one year .

The TTD board decided to gold plate the Ananda Nilayam, the sanctum Santorum of the Tirumala temple on suggestion of agama pundits, peethadhipathis and pious devotees to further promote Hindu dharma and devotion among the pilgrims. The total scheme costing Rs.1000 crore will be met from internal revenues and gold donations from philanthropists under a special donation scheme titled Ananda Nilayam Ananta Swarnamayam pathakam.

The TTD has drawn up an ambitious donation scheme to attract donors for the scheme.” The response is spontaneous and we expect that the TTD will be able to complete the work on a war footing,” says the TTD chairman Sri. D.K Adikeshavulu. The plating works on the pillars of the Jaya Vijaya complex near the Hundi and entry to sanctum of Sri Venkateswara has almost been completed.

The exercise of gold plating the Srivari Temple began way back in 1267 when the then Pandyan King Sundara Pandyan took up  gold plating of the kalasham of ton the gopuram of Ananda Nilayam sanctum.Later the Saluva King Mungidevudu in 1359 and the Vijayanagara emperor Sri Krishna Devaraya provided  in 15th century donated over   1000 kgs of gold for the gold plating of the entire gopuram of the sanctum of the Srivari temple.  In 1958 the Temple authorities got the sanctum outer wall ( frontal  face of  200 sq meters ) gold plated with 12 kgs of gold donated by the devotees.

The TTD chairman Sri. AdiKeshavulu Naidu says that the TTD board has taken up this unique program as per the suggestions of Agama Shastra pundits and the Peethadhipathis of the Vaikhanasa cult to enhance the divine energy  of the grand idol of  Lord Venkateswara  .

The authorities have plans to digitise the inscriptions on the outer and inner walls of the Srivari Nilayam stretching around 10,000 square feet. “Tthe gold plating will be done without damaging the inscriptions by leaving an half inch gap between the wall and the plating “, says the Executive Officer Sri. I Y R Krishna Rao ..

“The devotees who offer one kg of gold or multiples will be honored in a unique manner by the TTD- annual free VIP darshan, laddu prasadam and accommodation ” he says. The donor scheme will provide them special benefits and other concessions in darshan, accomodation, prasadam etc once a year

With the gold plating of the Srivari Ananda Nilayam, the TTD will join the club of prominent Indian religious shrines like Golden Temple of Amritsar, the seat of Sikhism in the country. “The Tirumala temple will be more unique in so many ways for reputation of its legendry divine energy and for fulfilling every wish of its ardent devotees and committed followers”.

TTD  EO  Krtishna Rao said  complete list of  jewellery of  TTD temples  is being compiled  by a special task force created  for the purpose and the same will be  made public  on  placed  on line  soon . 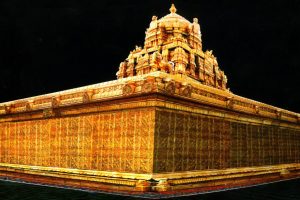 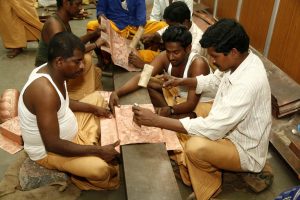 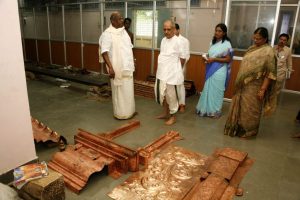 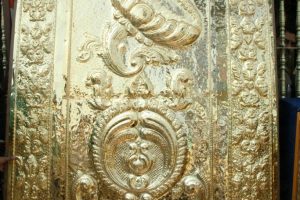 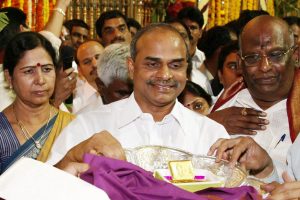