Inauguration of the HINDU DHARMIKA PARICHAYAM Programme for RURAL YOUTH at SVETA, Tirupati

HINDUISM IS NOT A RELIGION BUT IT IS A DHARMA-CDAC CHAIRMAN SRI J.RAMBABU

TIRUPATI, JAN 26:  Hinduism is not a religion but it is a Dharma and is a way of life unlike other religions, said Sri J.Rambabu, Chairman of Central Dharmic Advisory Council.

Addressing the inaugural session as the Chief Guest for the unique programme chalked out by TTD to enlighten the rural youth on Hinduism, Sri Rambabu said, “Hinduism is the world’s oldest extant religion, with billions of followers. Hinduism is a conglomeration of religious, philosophical, cultural ideas and practices and it has even the broad minded approach to welcome all the good practices of other religious beliefs and faith”, he added.

He assertively expressed that the innovative and noval programme initiated by TTD will yield fruitful results in further promotion of Hindu dharmic values across the country in future.

In his address TTD EO Sri IYR Krishna Rao said, the prime motto of TTD is to promote dharmic values even at the remote areas and especially among the rural youth. “As a part of that TTD has mulled this programme where in five or six youth from each community will be selected and trained up in Hindu dharma”, the EO maintained.

He said the Hindu dharma is not confined to any particular caste and is the religious faith to all communities. The entire dharmic propagation programme will be carried out under the aegis of Hindu Dharma Prachara Parishad and TTD is also planning to train up rural women in Hindu Dharma in future. “The Endowments Department of Andhra Pradesh has also agreed to instigate such programmes across the state”, he added.

Meanwhile about 60 rural youth hailing from Adavi Kandriga and Vellore villages of Pichatur mandal in Chittoor district participated in the first phase of training programme. 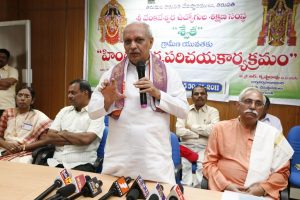 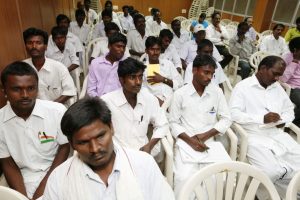 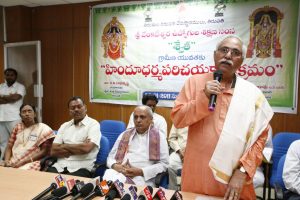