TIRUMALA, NOVEMBER 2:  The temple administration of Tirumala Tirupati Devasthanams(TTD) is contemplating to restructure and reorganize the existing computer system in reservation and booking of sevas and accommodation with hi-fi technology for the convenience of both the pilgrims as well as temple management.

The specified authority of TTD comprising its chairman Sri J. Satyanarayana, and members, TTD EO Sri I.Y.R.Krishna Rao and Sri V.Nagi Reddy during the board deliberations in Annamaiah Bhavan at Tirumala on Tuesday has taken some important decisions.

Addressing media persons after the board deliberations, the specified authority chairman Sri J.Satyanarayana said, TTD which has constituted a three-member IT advisory committee four months ago has come out with a concrete proposal to revive the existing old computer technology in the temple management.

“The committee suggested revamping the existing internet band width and also reviving the hardware servers. The estimated budget will be approximately one crore”, the chairman said.

He further said, “We are also contemplating to increase the number of counters in CRO from two to ten to cater to the needs of the pilgrims to a greater extent. These centers will also be equipped with hi tech computers and we are hoping to perk up the system by March next”, he added.

The specified authority chairman said, Earnest and Young Company has come forward to give a detail designing of the ‘Sri Seva’ project at a cost of Rs.55lakhs in one month duration. This project will not only benefit the pilgrims to get seva, darshan, accommodation facilities in a single window system but also benefit the temple administration in long term process”, he said.

Sri. J.Satyanarayana also said that the board has also taken a decision to revive the existing seva and accommodation system and planning it to bring under one umbrella for the convenience of the devotees under the supervision of Joint Executive Officer of Tirumala, Sri P.Bhaskar.

The board has also decided to organize a Panchanga Ganitha Sadas from December 24 to 26 where in about 220 scholars comprising Veda pundits, Astrologers and scientists from ISRO, astro-physicians will take part and discuss about reconciliation on the righteous prospects of almanac.

The old pedestrian way on the first ghat road, which has been non-functional in the last 64 years would be restored at a cost of Rs.6cr in a span of 6 to 9 months. A road would be laid from Narasimhaswamy temple to Mokali mettu covering 1.5km for the sake of the pilgrims.

A new look will be attributed to bout 5000 rooms which are almost five decades old, comprising Rs.50 and Rs.100 as they will be renovated on priority basis in the next three to six months for the benefit of commoners.

TTD will also revive the temples in the Papavinasanam and Akashaganga areas as they are often visited and worshipped by not less than 12thousand pilgrims on any given day.

A veda pathashala will come up in the 9.17acres land allocated by state government to TTD at Chilakur in Ranga Reddy district and a spiritual centre in 3.5acres land in Bangara Hills area.

Retired IAS officer Sri J. Rambabu will chair the Central Dharmic Advisory Council set up by TTD to supervise the dharmic activities taken up by the temple management for a period of two years.

The EO said the remaining rooms in VQC II will be air-conditioned at a cost if Rs.2.2cr.

Later all the board members wished the devotees and pilgrims a “Happy Deepavali”. 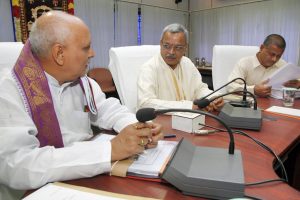 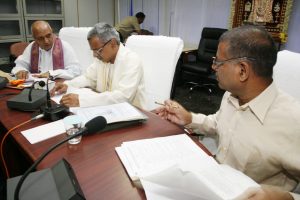 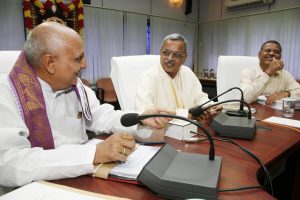