TIRUMALA, JULY 23: The two important festivals of Tiruvadipuram and Purusaitototsavam have been performed with religious fervour in Tirumala on Monday with the former one being performed in connection with the Janmotsavam of Andal Sri Godadevi while the later on the occasion of the death anniversary of famous Vaishnavaite saint Sri Anantalwar.
Earlier in the day, Andal Tiruppavai Pasurams have been rendered in front of the main deity of Lord Venkateswara.
Later the processional deities of Sri Malayappa Swamy accompanied by his two Consorts Sridevi and Bhudevi have been taken to Sri Purusaivari Tota on procession. Meanwhile Sri Anantalwar (1053AD) dedicated his 102 long span years in the service of Lord Venkateswara by paying special floral tributes. To mark the rich contributions of this Vaishnavaite saint, Purusaivari Tototsavam is being performed every year in Tirumala. After reaching Vrindavan of Anantalwan, Astanam has been performed to the processional deities. Later the special garlands of Lord Malayappa have been decorated to a tree which is believed to be Saint Anantalwar.
TTDs JEO Sri KS Srinivasa Raju, Special Grade Deputy EO Sri TAP Narayana, Deputy EO Sri Munirathnam Reddy and other officials were also present.
ISSUED BY TTDs PUBLIC RELATIONS OFFICER, TIRUPATI 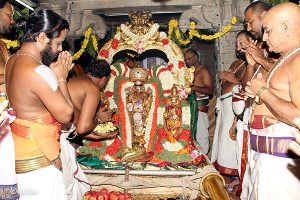 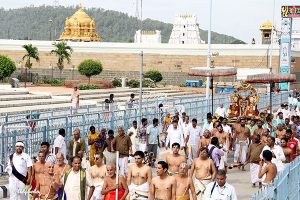 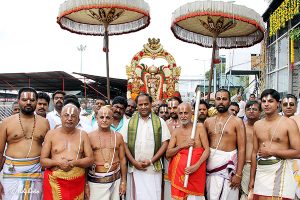 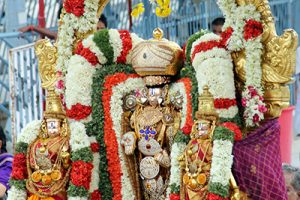